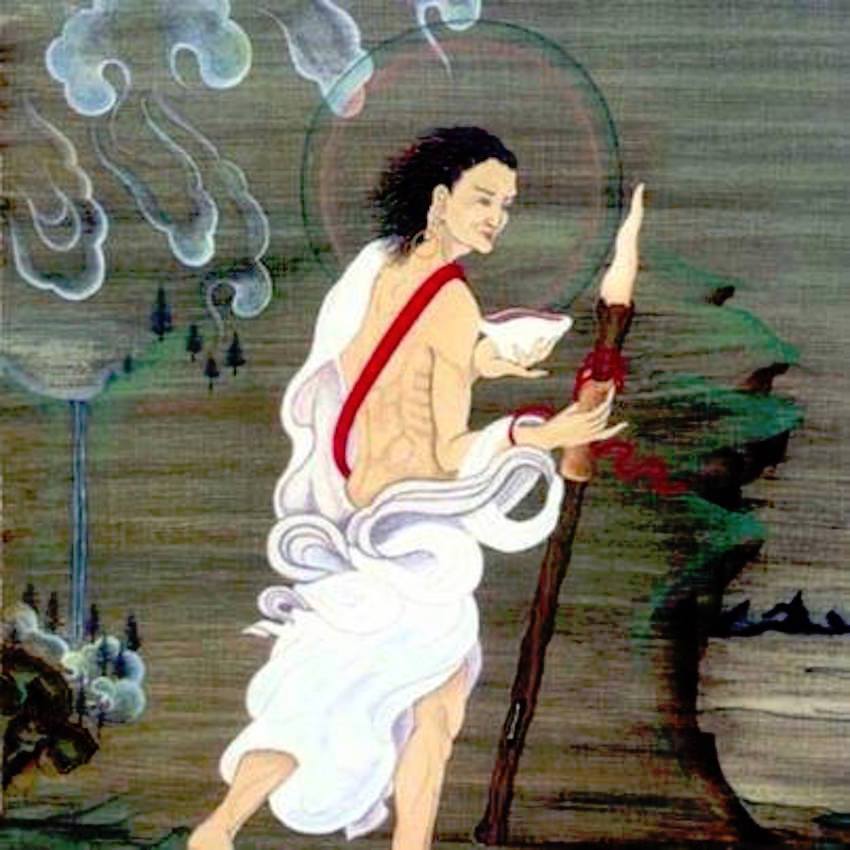 Milarepa:Both Samsara and Nirvana Are neither existent nor non-existent;

Once lived a Saint, known as the second Buddha;
His fame was heard in all the Ten Directions.
To Him, the Jewel a’top the eternal Banner of Dharma
I pay homage and give offerings.
Is He not the holy Master, the great Midripa?

Upon the Lotus-seat of Midripa
My Father Guru places his reliance;
He drinks heavenly nectar
With the supreme view of Mahamudra;
He has realized the innate Truth in utter freedom.
He is the supreme one, Jetsun Marpa.
Undefiled by faults or vices,
He is the Transformation Body of Buddha.

He says: “Before Enlightenment,
All things in the outer world
Are deceptive and confusing;
Clinging to outer forms,
One is ever thus entangled.
After Enlightenment, one sees all things and objects
As but magic shadow-plays,
And all objective things
Become his helpful friends.
In the uncreated Dharmakaya all are pure;
Nothing has ever manifested
In the Realm of Ultimate Truth.”

He says: “Before Enlightenment,
The ever-running Mind-consciousness within
Is shut in a confusing blindness
Which is the source of passions, actions, and desires.
After Enlightenment, it becomes the
Self-illuminating Wisdom —
All merits and virtues spring from it.
In Ultimate Truth there is not even Wisdom;
Here one enters the Realm where Dharma is exhausted.”

The coproreal form
Is built of the Four Elements;
Before one attains Enlightenment,
All illness and all suffering come from it.
After Enlightenment, it becomes the two-in-one Body
Of Buddha clear as the cloudless firmament!
Thus rooted out are the base Samsaric clingings.
In Absolute Truth there is no body.

The malignant male and femal demons
Who create myriad troubles and obstructions,
Seem real before one has Enlightenment;
But when one realizes their nature truly,
They become Protectors of the Dharma,
And by their help and freely-given assistance
One attains to numerous accomplishments.

In Ultimate Truth there are no Buddhas and no demons;
One enters here the Realm where Dharma is exhausted.
Among all Vehicles, this ultimate teaching
Is found only in the Tantras.
It says in the Highest Division of the Tantra:
“When the various elements gather in the Nadis,
One sees the demon-forms appear.
If one knows not that they are but mind-created
Visions, and deems them to be real,
One is indeed most foolish and most stupid.”

In time past, wrapped up in clinging blindness,
I lingered in the den of confusion,
Deeming benevolent deities and malignant
Demons to be real and subsistent.
Now, through the Holy One’s grace and blessing
I realize that both Samsara and Nirvana
Are neither existent nor non-existent;
And I see all forms as Mahamudra.

Realizing the groundless nature of ignorance,
My former awareness, clouded and unstable
Like reflections of the moon in rippling water,
Becomes transparent, clear as shining crystal.
Its sun-like brilliance is free from obscuring clouds,
Its light transcends all forms of blindness,
Ignorance and confusion thus vanish without trace.
This is the truth I have experienced within.

Again, the foolish concept “demons” iself
Is groundless, void, and yet illuminating!
Oh, this indeed is marvelous and wonderful!