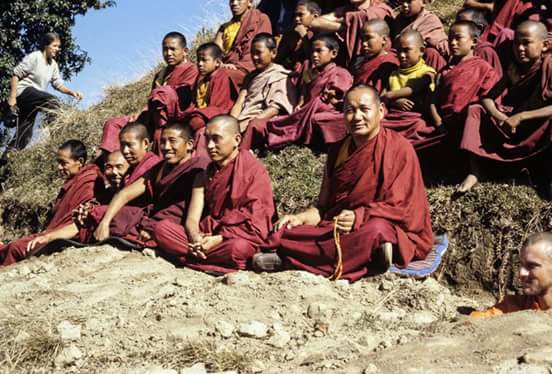 The most profound way of living is with great compassion for all universal living beings.

How many different religions are there in the world today? I’m not criticizing, but just look at how many followers they have and how these people are practicing their religion. What kind of refuge do they take? Check up.

Many people are like this. They have no understanding that it’s only the light of wisdom that can elevate you into liberation, nirvana, salvation or whatever you want to call it, so they take refuge in mere atoms instead. They also engage in mistaken practices. Like in Nepal, many people believe that their religion says they have to sacrifice animals to the gods, so at certain times they can kill as many as 100,000 sentient beings in a day. The streets run with blood; if you were to go there you might slip and fall in it. This is just so wrong. I’ve seen the same thing about Africa on TV. They sacrifice animals and rub their blood on the god to appease him. Such wrong conceptions and wrong paths lead you to ruin your life.

I’m not criticizing other religions, merely trying to point out reality—if you engage in such practices you’re leading the wrong kind of life. We’re allowed to explain the way things are. Saying that one thing is right and another is wrong is not criticism. If, with a biased, deluded mind, you say, “My religion is better than yours; yours is just wrong,” that might be considered to be criticism, but if, with discriminating wisdom, you point out the difference between right actions and wrong, that’s a completely different thing.

It’s similar in Buddhist countries, too. Simple, uneducated people take refuge by going to temples and folding their hands at their heart. That’s how they take refuge. They light candles, make prostrations and pray hard for something but don’t understand how their everyday actions could be leading them to liberation or the unified state of buddhahood and so forth.

The advantage of growing up in the West is that you receive a good education and intellectual training. In general, people from common Eastern families aren’t trained to think, nor do they have much religious training, so all they can do is take refuge in the simplest way. Western people are very intelligent and good communicators and can examine all of the world’s religions. That’s good; you can see the whole picture rather than a narrow section of it.

And when you do survey the entire range of possibilities, you can see how worthwhile it is to take refuge in the preeminent qualities of the Buddha, the wisdom of the Dharma and the support of the Sangha, your Dharma friends who give you a good visualization and help you in your practice.

It’s so worthwhile to take refuge in that which can truly liberate you. You have to understand that. Otherwise you’ll see people taking refuge in the sun, the moon or something else up in the sky. People look up at the sky and, thinking God is up there, fold their hands and cry, “Please help me.” They look up pleading for God’s help, yet down here on earth engage in ridiculous actions, somehow expecting him to reach down and say, “My child, come to me.” God can’t guide you that way. It’s impossible.

However, taking refuge in Lord Buddha’s good qualities and Dharma wisdom is not some kind of partisan political act—“Now I’m a member of the Buddhist party.” Be careful. It’s easy to develop that kind of attitude through attachment to your own ideas. You think, “I like the Buddha’s philosophy.; now I belong to his party,” and then look down on others. You look down on others but you don’t look within yourself.

Lord Buddha’s philosophy is actually a way for us to relate to our own everyday life. It’s a boat to cross the river of delusion, an elevator to the heights of everlasting peace. Its purpose is to take us beyond delusion, to make our mind happy and healthy. That’s why we take refuge, why we practice Dharma. Be careful that that’s your purpose too.

Lord Buddha’s teachings are incredible, absolutely too much! You can see how they can elevate you, but when you listen to or try to practice teachings, your conceptions flavor them. It’s like when you bake a cake you can add this flavor or that. Similarly, Dharma means one thing but you flavor it to mean something else; Buddha means this, but you make it that. It’s actually extremely difficult to act purely with the right understanding of reality.

However, it’s so worthwhile, really worthwhile, just to discover that, instead of superstitiously looking outside of yourself, seeking happiness out there, there’s something much better than the material world to be found within. Discovering that and deciding to seek happiness within you rather than out there, you take refuge in the wisdom of Dharma and the knowledge of the Buddha, knowing that if you act in accordance with his knowledge, you too can attain his level of understanding and become a buddha yourself.

That’s why we practice the Guru Shakyamuni yoga method. Normally we have the dualistic mind that tells us, “Buddha’s up there; I’m down here, nothing.” Guru yoga closes that gap: Shakyamuni Buddha dissolves into us and we unify with him. By training in this way we destroy the dualistic mind.

We should be open and honest with ourselves and admit that for countless lives, and even in all of this one, we have been taking refuge in the external world. What has been the result? Confusion and more attachment. Who has the power to release us from all this? It’s only the Buddha and his knowledge-wisdom. Through his profound wisdom, he’s the only one who can show us the reality of who and what we are.

Of course, it’s not only about us; we’re not the ones with the greatest suffering. All mother sentient beings are in the same situation—seeking satisfaction in the external world with the wrong attitude and experiencing misery as a result. Although all they want is happiness, because of using the wrong method, they end up more miserable than ever. So we also need to generate compassion for them.

Lord Buddha, the ultimate physician, is a perfect object of refuge because he has perfect knowledge. Ordinary, worldly doctors don’t even come close to this. They cannot see our inner nature, the evolution of our delusions or how to attain liberation, so of course they can’t show us all this. Lord Buddha can, and does so clean clear.

He also has universal compassion and doesn’t discriminate between beings. For example, let’s say my dear wife loves me and I love her…we clearly discriminate in such relationships. Lord Buddha’s compassion, however, is nondual; we can completely rely upon his universal compassion. We can never rely on somebody who is selfish, unequal or partial—such a person is obviously not a perfect object of refuge; not completely reliable.

Lord Buddha, with his knowledge and universal compassion, shows us the light of Dharma clean clear. This is actually medicine, and through it we can realize the light of wisdom within ourselves. It’s possible.

So think, “From now on until I gain perfect and complete enlightenment, I forever take refuge in Buddha, Dharma and Sangha.”

The most profound way of doing this is with great compassion for all universal living beings without partiality for family and friends. This way is an incredibly powerful way of destroying the fanatical, schizophrenic view of the deluded mind.