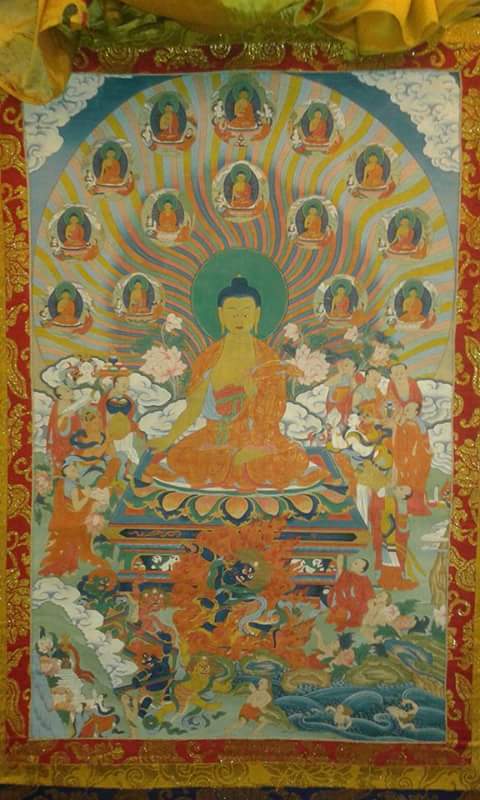 The Sutra of the Exalted Great Glorified Female Being

Prostration to all the buddhas and bodhisattvas.

These twelve holy names of the Great Glorified Female Being, anyone – bhikshus (virtue beggar), bhikshunis (female virtue beggars), upasakas (male nearing virtue), and upasikas (female nearing virtue) – and none other than those – who knows of this, keeps this text, reads it, writes it, leads others in writing it; this one will eliminate poverty and will become wealthy.

Then, all the assembly of yakshas (jungpo) assented saying, “May it be so.”

Then, the Bhagavan proclaimed, “The twelve holy names of the Great Glorified Female Being are as follows:”

For anyone who recites this three times,1 all opposing forces will perish and you will become the fortunate one. You will have good fortune and you will have unceasing wealth. When you recite this and then go to see someone, that person will regard you as his/her child, will be happy, and will do exactly as he/she is asked.

If you recite this unceasingly, even if Brahma and the Brahmins do violent activities to bring harm, you won’t be affected. It also becomes as if having made offering to many buddhas. The Bhagavan has proclaimed it like that.

Then the Bodhisattva Compassionate Eye Looking One Endowed with Qualities rejoiced and highly praised the teaching of the Bhagavan.2

The Sutra of the Exalted Great Glorified Female One is completed.

May this fulfill all the wishes of anyone who sees, touches, or remembers it, let alone those who recite it. May it immediately pacify all problems, poverty, and danger. May all their wishes be fulfilled immediately, and may this cause them to generate the good heart and achieve enlightenment quickly.

This practice is for overcoming financial difficulties, especially if someone is causing you financial problems, but also to empower financial endeavors that are dependent on others to bring success.

This can be given to anybody who has difficulties such as not having wealth. Also, those who are having great difficulties finding a job and who have no money, or who have a lot of debt, a difficult life, and who are unable to pay [their bills].

1 From Lama Zopa Rinpoche: “Once you have the idea of how this teaching happened and the benefits, when you do the recitation, you do not have to recite the whole sutra. Just recite the main teaching – the twelve holy names of the Great Glorified Female One and the mantras.” [Return to text]

Sutra Illuminating the Darkness of the Ten Directions

Tathagata, arhat, perfectly completed buddha the Clearly Superior King of Concentration Without Fear and Free of Darkness
Above

Tathagata, arhat, perfectly completed buddha Living and Abiding in Cutting Off Doubt and Agitating Afflictions
Below