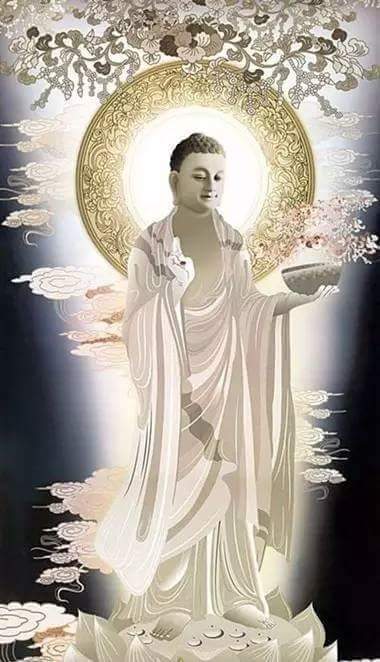 The Buddha: The Sutra of Causes and Effects of Actions

Once the Buddha was at Sravasti town, in the garden of Jeta, with many monks (sramana) and countless bodhisattvas and gods (devas), and they were with countless other worlds in company. The Chief Sovereign of the World (Lokajyestha) was expounding the Law and the assembly was listening with pure minds.

Thereupon Ananda, on account of these human beings, addressed the Buddha thus:

Thereupon Ananda addressed the Buddha thus: “As the Buddha has explained, one who may be at fault in anything concerning ordained persons, it is very serious. If it be so, how then will the donor (danapati) enter the vihara for worship and for reverence and prayer?” The Buddha said to Ananda, “The person who enters the monastery (samaharama), may have a mind of two kinds: one with good thoughts, the other with evil thoughts. Now the person who enters with good thoughts is such that, if that person sees the Buddha, he pays homage; if he sees an ordained person, he pays respect, asks for an explanation of the sutra and precepts, begs forgiveness, does not spare his wealth and strives for the three jewels; he does not spare himself or his life and supports the great Law. When such a person walks one step, paradise comes to him, reaching him itself, and he has the same retribution as Jodiga (Jyotiska) and is called an altogether eminent person. But the person with evil thoughts is such that when he enters the vihara, he will beg something from the sramanas, seek out the sins of the ordained and cause them torment, eat the food of the sramanas and have no shame of them. When such a person dies, he falls into the hell of heated iron lumps, where there is cauldron and furnace, the mountain of knives and trees of swords, and there is no place anywhere which he will not reach; such a person is an entirely inferior one.”

The Buddha said to Ananda, “Later such a time will come–tell the disciples that they should take good heed of the Three Jewels and not be at fault and strive in good deeds and not make a retiring mind, for those who believe the words of the Buddha–when Matreiya Buddha shall go out into the world–will at once find salvation, have no doubt of it.”

Then the Buddha spoke further to Ananda thus, “These many kinds of things that I have explained are all because the person commits the following ten kinds of misdeed (in the first degree, the person falls into hell; in the second, among animals, and in the lowest, into the existence of pretas).

2. The person who commits theft falls both into hell and into the existence of animals and pretas, and when born human acquires two kinds of retribution: one is that the person is born poor and needy and the other is that the person’s possessions are united with those of others so that he cannot act at will.

4. One who speaks lies falls both into hell and into the existence of animals and pretas; and when later is born human acquires two kinds of retribution: one is that whatsoever the person does, everything is subject to damage and calumny and the other is that people constantly injure the person with lies.

5. One who is deceitful and two-tongued falls both into hell and into the existence of animals and pretas; and when later is born human acquires two kinds of retribution: one is that he encounters relatives who torment him and the other is that he is attached to irritable relatives.

6. He who is evil-tongued and abusive falls both into hell and into the existence of animals and pretas, and when later is born human acquires two kinds of retribution: the first is that the person always hears evil noises and the second is that whatever the person says, there is always quarreling and dispute.

7. The person who uses ornate words falls both into hell and into the existence of animals and pretas; and when born human acquires two kinds of retribution: the first is that even though the person speaks the truth, nobody believes him and the other is that whatever the person says, he is completely unable to bring it to an end.

8. The person who is greedy suffers both hell and the existence of animals and pretas, and when born human acquires two kinds of retribution: one is that the person is always insatiably greedy for possessions and the other is that whatever the person seeks and gets, it is not at all as his heart desires.

9. The person who is irascible suffers both hell and the existence of animals and pretas; and when born human acquires two kinds of retribution: one is that people seek the person’s faults and shortcomings and the other that they always cause the person pain and suffering.

10. The person who has heretical views suffers both hell and the existence of animals and pretas; and when born as human, acquires two kinds of retribution: one is that deception is always born in the person’s heart. Now O child of the Buddha, these ten kinds of misdeed are the cause of all kinds of evil of the way.”

And then among the great assembly there was a man who had committed the ten kinds of misdeed. When he heard from the devatideva these infernal punishments and retributions he began to weep and lament; and he spoke thus to the devatideva Buddha: “Chief of the World, what sort of good deed should I now do, that I may be delivered from this evil?” The Buddha said to him, “Arrange the minds of all people and all of you, united together, practice piety and good deeds. For the person who in this existence is a great mind-converter, is a chief among all people, and whoever makes a vihara or a vihara house, will in a future loka be a minister in the royal assembly and a chief of the people, complete and intelligent in everything that is desirable and pleasing to the person’s mind. The person too who in this existence arranges the minds of people so that they practice all kinds of good deed will be rich and fortunate in future loka and will do him honor and regard the man with respect, and in the four directions the way will be open to the person; all work that the person begins will be successful. One who in the present existence likes to light the lamp will be born in a future loka near the sun and the moon and his bright splendor will always shine. One who gives gifts and is compassionate and does not kill, in whatever place that person is born, will be rich and fortunate and will not only lack neither possessions nor riches in food and clothing, but they will appear spontaneously. One too who gives food, in whatever place the person is born, divine food will appear spontaneously; the person will be complete in beauty and strength, brilliant, intelligent, eloquent and long-lived. If one gives a gift to an animal, accordingly the person will acquire recompense a hundred-fold. If one gives a gift to an ordained person who keeps the precepts, the donor will acquire recompense a myriad-fold. But if the person gives a gift to an ordained person, a master of the Law, who expounds the law of the treasure of the secret of the Great Vehicle of the Buddha, who opens the eyes of the great assembly, the donor will acquire countless many recompenses. How much more then, you may ask, will the person who gives a gift to bodhisattvas and to the Buddhas acquire; how much countless recompense the person will acquire! And if the person gives a gift to these three kinds of people, he will acquire recompense without end: if to the Buddhas, and secondly to his mother and father, and thirdly to a sick man, he gave a gift of one meal so great is his recompense. How much more then, you may ask, one who gives always; how can this person’s reward be counted? Now the person who gives the ordained a bath and shall wash their bodies, in whatever place the person is born, will be handsome and food and clothing will be ready and from people he will receive honor and respect. One too who loves the sutra and shall read it and praises and exalts it, in whatever place born, the person’s voice is ornate and excellent; whoever hears it rejoices in their heart. One who keeps the precepts, in whatever place born, will be handsome and among persons the very foremost. The person who digs wells and sets jars of water on the roads so that the travelers may drink, and shall plant trees so that persons may sit in the shade, in whatever place born, the person will be a leader of people and a hundred kinds of food and drink, according to the person’s desire, will come of themselves. The person who loves to write the Law of the sutras and gives it to people for them to read it, in whatever place born, will be eloquent in explanation, and whatever Law the person studies, when hearing it once, the person takes it all in and understands it; the bodhisattvas always protect and watch over the person and among all people the person will be the very first and foremost. The one too who makes a bridge or puts a boat for men to cross, then whatever place born, the person will have the seven kinds of jewels entirely and all people will praise and honor the person; where he goes and arrives, all do him honor and regard him with respect.”

Then the Buddha said to Ananda thus, “The sutra and the Law which I have expounded in every place, the causes and the effects–exhort all living beings to read them and act upon them so that they may be saved from evil. But the person who hears this sutra and scorns and slanders it–as for such a person, (even) in the present world, his tongue falls to the ground.”

Thereupon Ananda addressed the Buddha thus, “O Chief of the World, what name should be given to this sutra, and how should we dispose our minds (towards it)?”

The Buddha said to Ananda, “Let the name of this sutra be The Causes of the Retribution of Good and Evil, and let its name also be The Sutra of Righteousness with the Desire of Becoming a Bodhisattva, and let it be understood and kept in that way.”

Now when the Buddha had finished expounding this sutra, eight myriad of divine men in that assembly disposed their minds towards utmost complete enlightenment (annutara samyaksambodhi), one thousand two hundred evil men abandoned their poisoned minds and understood the previous loka; many were the pious men who acquired the view of non-birth and received eternal joy; many were the dead who were reborn in pure lands and who assembled with the Buddha. Then the great assembly all became joyful and they set out and began to practice piety and good deeds and accepted the commandment of the Buddha on their heads.

The sutra in which the Buddha has expounded the causes and effects of good and evil.

The Sutra of the Causes and Effects of Actions (in Sogdian). Edited by D.N. MacKenzie. (Taken from the Oxford University Press edition).