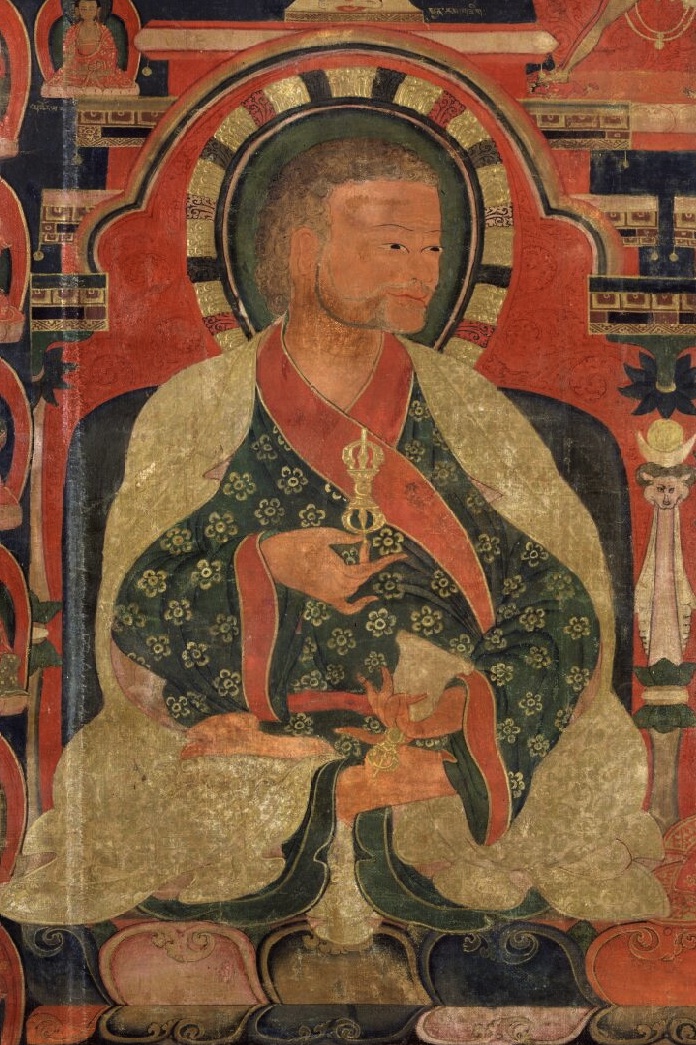 Gyal Khenpo Drakpa Gyaltsen, an illuminator of the Buddha’s doctrine

A SONG ON THE VIEW OPENNING THE EYES TO SUCHNESS

1 The glorious embodiment of great bliss and compassion,

Which through immersing in the expanse free of elaborations,

Most venerable teacher, I honor the dusts under your feet.

2 Whatever sufferings there are in the cycle of existence,

Since they are produced by the self-grasping enemy,

All children who desire liberation should strive for

In the ways that help eliminate this from its root.

3 Though this is so before understanding

This truth, suchness that is most profound,

There are numerous stages such as coarse impermanence,Suffering, emptiness and no-self.

4 While seeing that with no distinction of age

Suddenly one dies due to so many conditions,

If the thought that “I’ll die” does not arise,

How can realizations of profound path grow?

Even within a year, a month, or a day of a single life

Happiness and suffering, prosperity and misfortune

Remain uncertain. Knowing this he who still clings firm,

For him the hope of a genuine renunciation is difficult.

Not climbing at first from the lower steps

Of the staircase, that of Vaibhshika, of Sautrantika,

Of Mind Only and of Svatantrika, he who grabs

At the highest, this is an empty bravado.

This negating of a mentally contrived object of negation,

This [everyday] perceptions [of ours] untouched –

This strengthens further the fortress of innate grasping.

Though we may name it the “middle way,”

This measure of final emptiness of true existence in our mind,

More subtle and profound than this seems to be understood

By those who propound objective reality.

Through reasoning such as absence of identity and difference,

Though one may prove by mouth absence of true existence of things,

The self that is permanent, unitary and autonomous.

Objective Realists say that in the wake of removing the dusts

Of coarse self-existence from the gold that is the external reality,

There exists as self-resonance of a truly existing entity,

Something that projects its aspect to [the mind].

Rejecting this the Perception [only] Proponents say,

In the paint brush of inner subjective world,

There exists a part that is the truly existing paint,

Which is the seed for colorful diverse objects.

Are not perceived either in the object or in the subject,

From dependent origination of the meeting of metal and loadstone,

The final standpoint of glorious Nagarjuna is this:

Just like the appearance of face’s reflection in a mirror,

Apart from the mere appearances both without and within,

Nothing exists by virtue of an essence.

A lump of earth is called “head” and “limb,”

With such terms and through mere aggregation of constructed facts;

Yet with no sense of being designated from outside

They seem as if existing from their own side; how can this be true?

Though this is so through dependent origination of collections,

The gathering of merits acting as the basis,

Through coming together of conditions there is no denying

That all such needs as houses, family, and so on are procured.

From our savior Buddha up to ourselves,

Though our words stating “no true existence” are the same,

Our mode of perceptions are like east and west;

So the path is declared to be a sphere of individual awareness.

“That which arose from conditions is unborn;

It has no arising by virtue of intrinsic existence.

Since it depends on other conditions it is empty.”

No greater way of teaching exists than this statement.

Essential it is to ripen the cause, gathering merits and cleansing

This alone can help realize the view [of emptiness];

Most people hear the literal meaning of the statement,

“Because it arose it is unborn” as being self-contradictory.

By reflecting on the empty aspect though it may be easier

For the way of emptiness to dawn, it has dangers and pitfalls;

Even all the lower systems of thought claim in unison

That the extreme of eternalism is dispelled by emptiness.

By reflecting on this dependent origination of mere appearance,

If objects appear as empty this is most wondrous.

Through the very fact grasped at as true existence by all!

The dependent origination of effects being dependent upon causes,

Though this is accepted by all [Buddhist] essentialists,

That cause depends upon effect as well as enemy, friends and so on,

This nominal existence whereby everything is interdependent,

By extending this [truth] in all possible ways to all objects,

The three times, agent, act and so on, and analyzing in this way,

Is reversed so whatever is perceived dawns as empty.

At this point the analysis into the view is complete;

The intention of glorious Nagarjuna is found;

One has [then] entered the path that pleases savior conquerors,

A path free of the abyss of eternalism and nihilism.

The principal causes of accomplishing such an aim,

This is the planting of seed probing the definitive meaning

On the ground of faith and the soil of ethical discipline,

Where the warm blessings of deities and teachers descend.

If water and fertilizer of gathering the collections are poured,

And the weeds and stumps of erroneous paths are removed,

The harvest of final view [of emptiness] shall come to grow.

Through a song of words devoid of experience,

Though it’s hard to inspire others to dharma,

By repeating after my teacher’s sacred words,

Through this virtue may all beings be victorious.

This was written by the monk Konchok Tenpai Dronmé as requested for by Gyal Khenpo Drakpa Gyaltsen, an illuminator of the Buddha’s doctrine.

Translation in to english by Geshe Thupten Jinpa, 2007.