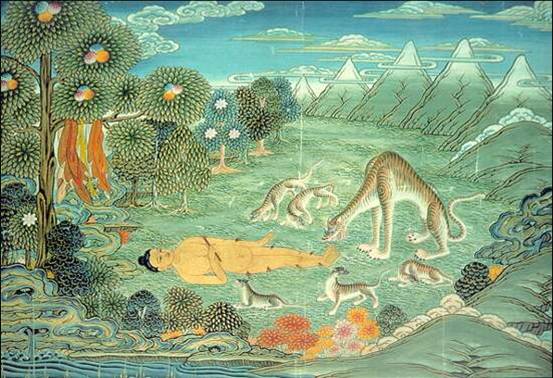 The compassion of the Buddha touches every living being.
His perfect love, dispassionate and unlimited,

Resonates throughout all his former lives.

Pg 3 – Before he became the Buddha, the Bodhisattva, in a series of lives too numerous to mention, through his wisdom blessed the world with countless demonstrations of his compassion, shown through giving, kind words, help­fulness, and consistency between words and deeds.

In one of his lifetimes, the Bodhisattva took birth in a family of brahmans which was renowned for purity of con­duct and spiritual devotion. And as a result of merit earned in former lives, he found himself showered with wealth, dis­tinction, and fame.

As a youth, the depth of his intellect was matched only by his eagerness to learn. He soon mastered the arts and sciences so well that the brahmans revered him as an au­thority dependable as the law itself; to the ksatriya warriors, he was as venerable as a king. To those thirsty for knowledge, he seemed a reservoir never empty; to ordinary people, he seemed a god.

Pg 4 – But he did not delight in power or wealth or fame. His former actions and his constant reflection on the Dharma had purified his mind; he saw all too clearly the inevitable suffer­ing that accompanies worldly pleasure, and the thought of renunciation was familiar to him. Without remorse, he shook off the householder’s life as if it were an illness, and moved to a forest retreat which became ornamented by his presence. – …

There, detached and tranquil, he radiated serenity. He affected even the worldly who were unattached to virtue, turning them away from their attachment to harmful ac­tivities. His wisdom and benevolence spread everywhere, softening even the hearts of the most ferocious animals, so that they ceased harming one another and began to live like ascetics themselves. By the power of his pure con­duct, control of the senses, contentment, and compassion, the Bodhisattva, while not associating with worldly beings, yet showed love to all.

Since his desires were few, hypocrisy was unknown to him; glory, gain, and pleasure held no interest for him. He glad­dened even the gods, who came to pay him homage. Hearing of his renunciation, his closest friends, who had been drawn to him by his virtues, left their families and joined him as disciples. He received them gladly and taught them what he could of good conduct, chastity, purification of the senses, mindfulness, detachment, meditation on loving kindness, and similar teachings.

His joyful existence attracted disciples with qualities simi­lar to his own. And so, through his teachings, most of his numerous disciples gained extensive realizations and were established in virtue-the doors to lower states of being were closed, and the gates to happiness were opened wide.

Pg 5 – One day the Great Being, accompanied by his disciple Ajita, was walking up a mountain trail to a place well-suited for yogice practice. As they passed by a ravine concealed by shrubs. Their contemplation was interrupted by the sound of fierce roaring.

gulch far below and discerned the sunken eyes and emaciated

body of a young tigress. It was clear she was exhausted and had not eaten for days due to the difficulty of giving birth. Maddened by hunger, she was beginning to eye her own offspring as food. The men watched as the thirsty cubs, fearless and trusting, approached their mother while she glared at them and growled as if they were the offspring of another.

Though composed in mind, the Bodhisattva, like a great tree shaken by an earthquake, was shaken by the sight of such suffering. So are the truly compassionate affected by the slightest suffering of others, though unmoved by great suffering of their own.

Out of the depth of his compassion, he lamented to his disciple: “Alas, behold the ferocity of self-love: a mother will feed on her young to satisfy her hunger! This, my friend, is the worthlessness of samsara. Who would foster self-love if he could see what it produced! Go quickly and find her some food, so that she will not harm her young ones and therefore also herself I will try to divert her until you return.”

The disciple went off as he was told, not suspecting that the Bodhisattva had sent him away for an altogether different reason. For the Bodhisattva was thinking: “Why should I

search for meat from the body of another when my own is at hand? Finding other meat is a matter of chance, and I would

Pg 6 – lose the opportunity to help. A body is frail, ungrateful, for­ever impure, and a source of suffering. How foolish not to rejoice at using it to benefit another.

“Two things alone cause people to ignore the grief of others: attachment to pleasure and inability to give aid. But I cannot feel pleasure while another being suffers, and if I have the power to help, how can I be indifferent?

“Even if the one who was suffering had committed the greatest crime, I could not withhold my aid; my heart would burn with remorse as readily as dry shrubs catch fire. Thus, I will forestall this source of suffering by throwing myself over this cliff. My body will prevent the tigress from killing her young ones, and prevent the young ones from dying in the jaws of their mother.

“This act will encourage those who yearn to help the world, and set an example for those weak in effort. It will hearten those who understand the meaning of charity, and will stimulate the minds of the virtuous. This act will disap­point the demons, gladden the friends of Buddha-qualities, and shame the selfish, the proud, and the lustful. It will inspire faith in the adherents of the Mahayana, and fill with wonder those who sneer at charity. At the same time, it will clear the way to the heavenly states of being for those who find joy in giving. I will fulfill my greatest aspiration-to benefit others by means of my own body-and so I shall approach great Enlightenment.

“Just as the sun banishes darkness and bestows light, so may this act banish sorrow from the world, generating hap­piness forever. I do not perform this action for glory or royal dignity, not even for supreme and everlasting bliss, it is for the benefit of all the world, that its joy will increase each time this story is told.”

Pg 7 And then, to the amazement of even the peace-loving gods, the Bodhisattva threw himself over the edge of the cliff, thus giving up his life. His body, in striking the ground, made a bud noise-and the startled tigress, forgetting her original intention, looked about her; seeing the Bodhisattva, she began to devour him.

Ajita soon returned empty-handed without having found an meat. He called for his teacher, but no answer came. Then his gaze fell to the chasm below, and he saw his teacher being eaten by the tigress. Sorrow and pain overwhelmed his heart, but the awe he felt at such extraordinary selflessness was even greater.

“How merciful the Great Being was to beings in distress, and how indifferent to his own welfare! How heroic and fearless his immense love! He has perfected the conduct of’ the virtuous and surpassed all others’ glory. His body, already precious for its virtue, has now been transformed into a

vessel worthy of the highest veneration.

“How steadfast and tranquil was his mind, as firm as the earth, yet how moved by others’ sufferings! How imperfect my own mind appears next to his splendid act of heroism. In truth, beings need no longer suffer, for he is the Protector. With the strength of his renunciation, he conquers all suffering, and Mara, lord of desire, grows uneasy, dreading defeat. Let homage be paid in every way to that Great Being: to his unrestrained and boundless goodness, for he is the refuge of all beings.”

In wonder at the Bodhisattva’s great action, the disciples joined with the gandharvas, the yakshas, the nagas, and the chiefs of the gods to cover the earth that held the treasure of the Bodhisattva’s bones with wreaths, bright cloths, jeweled

Pg 8 – ornaments, and sandalwood powder. Filling the air with songs of praise, they marveled at the selfless act performed by the Bodhisattva.

In this story, we can see how the Buddha, even in his former births, showed his immense love for all sentient beings. Seeing this great love gives rise to the utmost faith in him, and with this faith comes joy directed towards the Buddhas. In this way, faith is developed.

This account is also useful in explaining why we should listen carefully to the Teachings since the Dharma was attained through many difficult hardships. Inspired by an account such as this, one can praise the qualities of compassion that will lead to actions that benefit all beings.