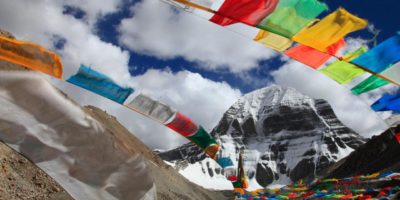 Milarepa’s Song on Mt. Kailash
The renowned snowy white Tise Mountain (Mt. Kailash):
Those who haven’t seen it still hear of it from afar.
Some say, “It’s like a white crystal stupa.”
When one approaches and is able to see,
The head of the mountain is wrapped in snow.
That head of the mountain is covered in snow
Was prophesized before by the Sugata (Buddha).
It became known as the Great Snow Mountain.
It is the hub, the navel, of Jambudvipa.
It’s the place where the white lion majestically stands.
This mountain that’s like a white crystal stupa
Is the palace of the Glorious Chakrasamvara.
The snow mountains that surround its edge
Are the residing seats of the five hundred arhats,
An object for the offerings of all the eight classes.
Those grass-covered hills that surround their edge
Are hills with fragrant incense
Which produce a medicinal elixir for healing life-threatening illness.
It’s a great site where accomplishment is attained,
A place where undefiled samadhi is found.
There is no place more amazing as this;
There is no place that is more wondrous than this.