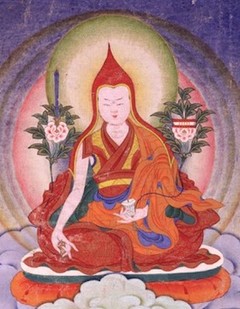 The Essence of Nectar: Graduated Stages of the Path

3.According to their advice, stabilise your mind
By knowing what to adopt and what to avoid,
Apply yourself to receiving and contemplating the teachings,
And awaken the wisdom that comes from meditation.

4.By not transgressing your vowed training,
You’ll achieve the state beyond regret,
From which, it is said, single-pointed concentration and
The perfect discrimination of Dharma will arise.

5.Through lesser, excellent and extraordinary application
Of the three higher trainings,
You may bring about the result of the śrāvakas and pratyekabuddhas or complete enlightenment;
Seeing this, perfect your view and conduct.

6.Initially, use your intellect to analyse thoroughly
The imagined and co-emergent self;
You’ll not find it as a naturally established,
Singular or multifaceted entity.

7.Furthermore, the objects this self regards,
When broken down into gross and subtle, and in directional parts,
Are found to be mere conceptual imputations,
Each designated with its respective name.

8.The various perceptions which grasp at these objects,
Like the experiences and experiencer in a dream,
Are all dependent on what is actually false,
So how could they themselves be real?

9.Even the experience of this wisdom of non-duality
Must be investigated with the reasoning of the three times.
Without grasping at arising, cessation or centre,
Free yourself from elaboration’s extremes.

10. Objects to be negated—all elaborations—
Are also primordially and naturally unobservable;
So the negation—freedom from elaborations—
Is also not truly established.

11. Similarly, by investigating objects in the same way
You’ll come to find the subject which is beyond expression—
The genuine expanse, an inconceivable place of rest.
This is what we call ‘settling meditation’.

12. Should you wish to approach the state of Buddhahood—
By means of compassion’s illusory nature—
For the sake of all dreamlike beings,
Who have not realised the nature through this approach,

13. You should swiftly achieve the most excellent wisdom,
By taking the highest vajra-vehicle,
Which is distinguished by its methods and is
The earnest endeavour of the learned.

14. Nāḍī, prāṇa and bindu—wisdom’s elements—
For them to awaken into the resultant four kāyas,
You should know how to plant continually the seeds
Of the four empowerments, of both cause and path.

15. With the condition of the stages of generation and completion,
And the close friend of the mantric precepts,
Combined with the secondary cause of conduct;
You’ll find the state of union within this lifetime.

16. With the correct realisation of emptiness—
Averse to the extremes of elaboration—
If you can arrive at the essence of great bliss
You’ll come to see the indivisible nature of samsara and nirvana.

17. With your gross body, speech and mind
Perfected as deity, mantra and dharmakāya,
It’s certain that you’ll reverse the common bewilderment of
Birth and decay within the three worlds.

18. To uproot the attachment of any clinging,
Through the yoga of the subtle nāḍī, prāṇa and bindu,
Activate the vital points of the subtle body
And directly induce the wisdom of great bliss.

19. When bliss and emptiness come together,
Through this extremely subtle union,
The clear light of training and no-more-training,
You’ll achieve the state of Vajradhara, with its seven aspects of union.

20. There is no need to say much, so, in essence:
Through thoroughly disregarding the affairs of this life
And striving to reach the state of liberation,
You form the basis for all subsequent paths.

21. The realisation of the way of abiding—the insubstantial nature—
And the mode of appearances—unobstructed dependent arising—
Conjoined with love for all beings,
Comprise the actual paths.

22. The ultimate, the wisdom of the natural state,
And the conventional, the generation and completion stages,
Naturally arising in accordance with the stages of method,
Comprise the path’s exalted Dharmas.

23. Finally, through the practice of guru yoga,
All ordinary subjects and objects
Arise as the great-seal of fervent devotion:
This is the excellent life-pillar of the path.

24. Eh ma! By this fine, short explanation
Of the meaning of the vast and profound,
May all, both animate and inanimate,
Arise as the web of magical apparition!

As requested by the yogi of the supreme vehicle, Chöying Palden, who is dedicated to the single-pointed pursuit of accomplishing the heart [of spiritual practice] and has caused the lotus bud of intelligence to bloom with the nectar of perceiving the all-pervading vajra-queen’s wisdom and, as such, is fearless in his understanding of many points of the outer and inner sciences, this was composed by the ignoramus, the untrained and bewildered ascetic, Jamyang Khyentse, who wrote down whatever came into his mind, at the isolated spot of Jangchup Chöling.

| Translated in haste by the English idiot Tenzin Jamchen (Sean Price) with the help of the sublime Khenpo Gyurme Tsultrim, 2007. Revised and edited for Lotsawa House, 2014. https://www.lotsawahouse.org/tibetan-masters/jamyang-khyentse-wangpo/essence-of-nectar