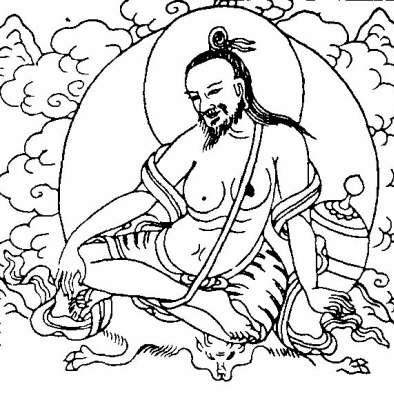 Mahamudra is knowing that

all things are one’s own mind.

The whole of “appearance” is as empty as a dream.

The mind as such is merely a flow of awareness,

without self-nature, moving where it will like the wind.

That which is termed Mahamudra,

Is not a “thing” that can be pointed to.

It is the mind’s own nature

that is Mahamudra [i.e., the Absolute State].

It is not something to be perfected or transformed.

that the whole world of appearance is Mahamudra.

This is the absolute all-inclusive Dharmakaya [i.e.,the Ultimate Embodiment of Buddhahood].

Uncontrived and just as it is,

is itself effortless meditation.

Trying to attain something is not meditation.

Neither separate nor not separate:

Such is the Yogin’s realization.

All virtuous and evil actions

Become liberated through this knowledge.

The sinful defilements become the Absolute Gnosis itself;

becoming the Yogin’s friend, this is a fire consuming the forest of trees.

Where then is going or staying?

Who then needs to run to a Monastery to meditate?

If one does not understand this point,

liberation will be but a temporary event.

When the true nature is realized,

one abides in the unwavering state.

Whether or not one is in the state of Integration or not,

There is nothing to be corrected by antidote or meditation.

Whatever arises is devoid of self-nature.

Appearances are auto-liberated into the Sphere of Reality (Dharmadhatu).

The non-duality [of these two] is the Dharmakaya.

Whatever occurs is meaningful and true.

This is the eternal Buddha state,

All phenomena are empty of self-identity,

Wherein even the concept of emptiness is eliminated.

Free of concepts, clinging not to mental projections,

is the Path of all the Enlightened Ones.

For those fortunate to connect with this teaching,

I have uttered these words of heartfelt instruction.

Thus, may all sentient beings

This exposition of Mahamudra (in thirteen four-lined stanzas) was given orally by the Master Maitripa to Marpa Chos-kyi-lodro, who translated it into Tibetan. It was translated into English from the original Tibetan text belonging to Bardok Chusang Rimpoche of Tingri by a Ngakpa-Yogin of the Dharma Fellowship., http://www.dharmafellowship.org/library/texts/concise-summary-of-mahamudra.htm.

Maitripa was a great Indian Buddhist master who was a contemporary of Naropa. He was regarded as one of the most knowledgeable people of his time on the Buddhist view.  For that reason, Naropa told Marpa the Translator that he should not get the view from him but should go to Maitripa and get it from him.  Thus Maitripa became the source of the view for the Kagyu lineage.  Maitripa is also famous for having re-discovered the Uttaratantrashastra of Maitreya which had been lost till that time.  Having recovered the text from an old stupa, Maitreya appeared to him and transmitted the profound meaning associated with that text.  In that way, Maitripa became a central figure in the transmission of what is called “the profound meditation system of Maitreya”.  In many ways, he was the source of the Other Emptiness (gzhan stong) style teaching of Maitreya and Asanga that came into Tibet.  For all these reasons, he is regarded as an important figure within Tibetan Buddhist history and is particularly important to the Kagyu and Nyingma. A number of Maitripa’s writings were included in a compilation of important Indian Buddhist texts which is simply called “The Main Texts of India”. It is a very old compilation, dating from the early days of the second wave of dharma that came into Tibet.  Maitripa’s writings are mostly very short and pithy and have the quality of oral teaching.  These writings always deal with the view and are very important to followers of the Other Emptiness teaching because they definitely show that view.