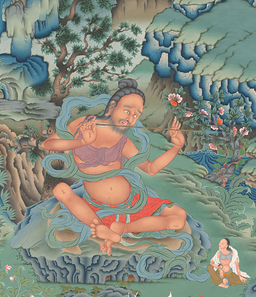 Homage to Sri Vajradakini.
Homage to innate union of Gnosis and Great Bliss.

This exposition is in three parts: The Mahamudra of ground, of path, and of the result.

Part One: The Ground of Mahamudra

A. Establishing an understanding of Reality

Being and non-being, appearance and emptiness, the moving and the abiding, the substantial and insubstantial embracing the whole of time and space, never departs from the sky-like original nature.

In referring to Ultimate Reality (dharmata) as the sky-like original nature, understand that to be sky-like is to have no intrinsic nature at all. It is completely beyond objectification and beyond all concepts such as “is” or “is not;” both “is” or “is not” or something other that “is” or “is not.” Between “sky”,”mind” and “Ultimate Reality” no distinction should be made. All these terms should be taken as mere designations and concepts. Everything is one’s own mind. Not so much as an atom exists outside of mind. Whoever realizes that from the very beginning there has been nothing other than mind, has acquired the realization of all the Buddhas of the three times.

What is shown as the Source of Phenomena (dharmadhatu) is not a worldly phenomena itself—rather, from the very beginning it is the original Innate (sahaja). That original nature cannot be pointed out. It is inexpressible and it cannot be comprehended in a dualistic manner

If there is an “owner” then there is something that can be “owned.” But if from the beginning there never has been a “self,” then what “owned” can there be? If mind has something objective, that one could “own,” then it would be an actual objective thing. But since mind is not an objective thing, who is it that can claim “ownership” of it?

Mind and mental-content are not external objects of perception, nor can one suppose there to be a person [separate from mind] who is capable of “seeing” or “owning” mind.

Non-existent throughout the three times, neither arising nor ceasing to be, the natural state of Great Bliss never undergoes any changes, ever. Thus know that the whole of Appearance is the Dharmakaya/Absolute Being. All sentient beings are the Buddha. All cosmic arisings and events are from the beginning not other than the Absolute Source (dharmadhatu). For this reason, everything that one can identify conceptually is as unreal as are the horns on a rabbit!

B. Understanding how beings are led astray

Alas! Even though the rays of the sun when unobscured by clouds shed light everywhere, nevertheless for the blind there is only darkness. The uncontrived Innate (sahaja) is omnipresent. Yet for the deluded it seems so far away. Because beings do not recognize that mind is not a separate entity, they obscure mind’s own original nature by becoming caught up in discursive and conceptual apperception. Thus, like someone who becomes mad due to “possession” by a demon, those possessed by the great demon of substantiality suffer helplessly and to no purpose at all. Believing in the reality of discrete phenomena, these “lost-souls” become bound by the limited views of mentation wherein they are caught. They are said “to lock the master in the house and go out seeking him elsewhere.” In other words, they believe their own projections are real. They should cut the very root, but instead are caught in the trimming the branches and leaves. Whatever they do, they cannot see that they are being deceived.

Kye Ho! Although un-evolved beings do not recognize their true nature, they nevertheless never depart from it. Since I have realized the true nature as without beginning or end, I see only “I-ness,” my true nature, alone abiding. This does not mean that I see this as an entity that I am looking at. There is no observer (ego) and observed (cosmos)—reality ineffable. Since it is ineffable, who is there to see it?

When the immutable mind is clarified, then shall you acquire the realization which I, this yogi-hermit, has gained. The milk of a lioness may not be held in an inferior pot. And when the lion’s roar echoes in the forest, though the timid deer are terrified, the lion cubs rejoice. Likewise, when the original uncreate Great Bliss is experienced, immature beings lost in ignorance are frightened, but the Fortunate Ones exult and the hairs on their bodies stand on end with awe.

Part Two: The Three Aspects of the Path of Mahamudra

A. Holding the View

Kye Ho! Do not fear distraction, trying to keep attention on the mind. If you realize the nature of your own mind, then even the wandering mind will be seen as the Mahamudra. In the state of Great Bliss all dualistic features become auto-liberated.

Like awakening from a dream, pleasure and pain then seem to have had no reality whatsoever. So, abandon hope and fear. Let go of trying to accomplish something or exhibiting anything. Since all the phenomena of both Samsara and Nirvana are devoid of “self-nature,” any clinging to hopeful or doubtful thoughts is simply meaningless. What is the point of striving to accept or reject anything? Even visible form and sound vibration are like a magical illusion, a hologram or a reflection in a mirror — they possess no substantiality. That which realizes this, the magician, is the sky-like mind itself. This one true nature is without centre or circumference, nor is there anyone separate therefrom who can comprehend this. Just as all the great rivers, the Ganga, etc., equally flow into the one Great Ocean, so mind and mental content have only one taste in the Dharmadhatu.

If a person observes the whole sky, they will realize that space has neither locality nor boundary. Thus they will dispense with such concepts. So when mind and all phenomena are investigated, not so much as an atom of objective substantiality will be found. The observer making this search, likewise will not be found. Observing this, realization shall be acquired!

Just as the crow that has flown from the ship, after seeking but finding no land, must return, and settle on the ship again, so the mind sent questing by our desires must eventually return, and settle in the unchanging nature of mind itself. Unmoved by stimuli, free of hope and fear, the hidden motivations destroyed and the root cut—this is the sky-like Vajra-mind itself.

B. Practicing the Meditation

Kye Ho! The real meditation is a non-meditation. Just keeping ordinary mind in its natural original state, unaffected by contrived efforts, is to abide in mind itself. This naturally clear mind is all that is required—effort is unnecessary. Without holding tight, without letting go, just rest in one’s own nature. When there is nothing to be attained, then the consciousness needs nothing to meditate on. The one who understands this transcends both object-of-meditation and meditator. Just as the sky cannot be an “object” for the sky, so emptiness cannot meditate on emptiness. This ultimate nondual realization is like cream mixed into milk, and thus everything becomes the single flavour of immutable ceaseless Bliss.

In this way, throughout the three times, abide effortlessly in the infinite original state of mind, just as it is. This is what is meant by the “practice of meditation.” Neither controlling the breath nor restraining the mind, rest in uncontrived awareness with the delighted innocence of a child. If thoughts and memories arise, stay in the presence of one’s true nature. Recognize that the waves are not different from the ocean itself.

In Mahamudra the mind is not controlled and there is not so much as an atom upon which to fix the practice—hence there is no meditation. The supreme meditation is to merely remain in non-meditation. The flavour of Nondual, spontaneous, innate Great Bliss has One Taste, like water mixed with water. Thus when one is merged in the natural state, the functions of seeking mind and the arising of conceptualization become completely pacified.

Behold! Yogis who abide in the immutable nature of nonduality possess not the least desire for accepting or rejecting. Since I neither hold nor discard anything, there is nothing I would tell you, my sons, to do. Just as the “holy grail” (mani) of the mind has no objective substantiality, so the conduct of a yogi is a life devoid of external trappings. Even though we talk of various ways of behaviour, the yogi acts directly out of his perception. And since that is not determined [by external rules or conditions], the yogis conduct is completely free and unconditioned. Like an innocent child, or a crazy person without premeditation, so one should act.

Wonderful! Mind is like a lotus, growing up out of the mud of Samsara! How ever many are the defilements, it remains unstained. Let food and drink, sensual pleasures, or the afflictions of mind and body, be just as they are. Whatever occurs, there is nothing to do or liberate.

In the State of Realization’s spontaneous display of conduct, upon witnessing the suffering of worldly beings, tears of overwhelming compassion naturally flow forth. Taking on their suffering and giving in return one’s own well-being, thus one engages in healing others for their sake. Examining what is, one finds that reality is free from the three constructs of subject, object and medium. Worldly existence is unreal; it is like a dream or a magical illusion. Free of attachment and aversion, the yogi experiences a pure joy devoid of sorrow, and acts like a master of illusion putting on a performance.

Part three: The Result of Mahamudra

Kye Ho! In the primordially clear sky-like nature there is nothing whatsoever to abandon or attain. This is Mahamudra free of a mental activity that aims for results. This very mind that aspires for a result is really uncreate from the beginning. Thus there is nothing to be gained or discarded at all.

If there was something to be attained, then what would become of the doctrine of the four Mudras? Just as a deer when confused by thirst might run in haste towards a mirage, so with the foolish driven by desire, whatever they seek is ever just beyond reach.

The original uncreate is pure from the beginning. When the conceptualizing mind that creates distinction is purified, then it automatically arises as Vajradhara (“the absolute-nature“) in the ground of reality.

Just as a mirage in the desert suggests water where none is, so the mind that constructs what is not real must be purified through its original nature. Like a wish-granting Stone (cintamani) of legend, this satisfies whatever is required through pure intent. For although in terms of ultimate truth nothing relative exists, nevertheless in terms of relative truth the conventional experience of the world is quite real. So understand it; so it is!

Thus is completed the “Treasury of Song” (Dohakosa) revealing the secret instruction of Mahamudra, which has arisen from the speech of the glorious yogi-hermit, Saraha. This was translated into Tibetan by the Indian pandit Vairocanaraksita.

It has been translated into English through the auspices of the Dharma Fellowship of His Holiness the Gyalwa Karmapa.