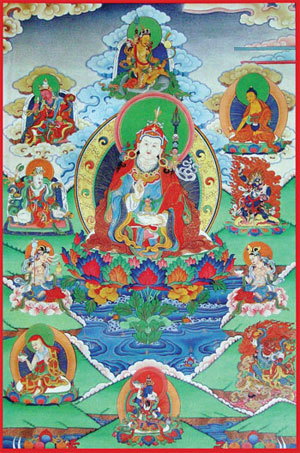 I, the woman Yeshe Tsogyal, having offered to you the inner and outer mandala on a vast scale, have the following request. Oh great teacher, Pema Jungne, you have been extremely kind to us, the Tibetan people, leaving for us a legacy that will benefit us now and in future lives. Your kindness is so great that we have never experienced anything like this before, nor will we ever experience anything like this in the future. In particular, so that now even though I am a humble person, I have no doubt that I will attain enlightenment.

In the future, sentient beings will have very short attention spans and a great many things will clutter and occupy their minds. Their characters will be rough and difficult to tame. They will develop many wrong views towards the sacred Dharma. In particular, a time will come when people will cast dispersions on the Secret Mantra teaching of the unsurpassable levels of tantra. At that time, all sentient beings will suffer heavily from disease, famine, and war. Because of the spread of these three calamities, in particular, China, Tibet and Mongolia will experience the same kind of turmoil as an ant’s nest when it is destroyed, and the time will come for the people of Tibet to suffer greatly. Though you have spoken at length of many skillful means to salvage what is possible from that situation, sentient beings in the future will not have the time to practice. Even though they may have some slight inclination to practice, they will encounter many great obstacles. Sentient beings will experience a great deal of disharmony. They won’t be able to get along or reach any kind of accord, and in the wake of this, their behavior will become very impure. Bad times such as this will be
very difficult to avert. That being the case, what kinds of benefits and advantages would there be for those beings in the future were they to rely solely upon the Vajra Guru Mantra as their practice? I ask you to relate this for the benefit of individuals in the future who are not able to perceive this and therefore have to have it explained to them.

Oh faithful lady, what you have said is so very true. In the future, such times will befall sentient beings and both in a temporary and in a long term sense, the benefits of the Vajra Guru mantra can be definitely be felt. Since my spiritual instructions and the methods of practice that I offer are immeasurable, I have hidden a great number of treasure teachings in the water, rocks, the sky and so forth. In these evil times, even individuals with fortunate karma will find it difficult to encounter these teachings. It will be difficult to bring together the necessary circumstances for these teachings to be revealed. This is a sign that the collective merit of beings is on the wane.

However, at such times, if this essence mantra, the Vajra Guru mantra, is repeated as much as possible, a hundred times, a thousand times, ten thousand times, a hundred thousand times, a million, ten million, a hundred million times and so forth, if it is repeated in holy places, in temples, next to great rivers, in areas where gods and demons abound, if it is recited in these places by tantric practitioners with pure samaya, by people with monastic ordination who maintain their vows purely, by men and women who
possess faith in the teachings, if they give rise to bodhicitta on a grand scale and recite this mantra, then the benefits and advantages and energy of such practice are truly inconceivable. This will avert all of the negative forces of disease, famine, unrest, bad harvests and all bad omens and indications in all the countries of the world, such that the rain will fall in a timely manner for the crops so there will always be a plentiful supply of water for agriculture and for human and animal life, and all regions and areas will experience prosperity and auspicious conditions.

In this life, in future lives, and in the intermediate state between death and rebirth, these individuals who practice in this way will meet with me again and again. The very best of these individuals will actually meet me in their waking consciousness. Those of middling degree of attainment will meet with me again and again in their dreams. Gradually perfecting the different paths and levels of their practice, they will attain to the ranks of the masculine and feminine holders of intrinsic awareness in my pure land in the continent of Ngayab. Have no doubt of this.

If one recites it a thousand or ten thousand times on a daily basis, one is able to literally overwhelm others with one’s brilliance, in the sense of becoming very charismatic and influential in exerting a positive influence over others, and one will gain unhindered force of blessings and spiritual power.

If one repeats it a hundred thousand or a million times on a regular basis one will become capable of effecting an immeasurably great benefit for beings, exactly as one would wish to.

If one recites the mantra three or seven million times, one is never separate from the buddhas of the three times and one becomes inseparable from me. All the gods and demons of existence will attend to one and offer their praises.

In the most excellent cases, individuals will attain the rainbow body, and the final level of attainment in this lifetime. On a more middling level, at the moment of death, the mother and child aspects of radiant luminosity will meet. At the very least, individuals will behold my face in the bardo state and all the appearances of the bardo state will be free in their own ground such that these individuals will be reborn on the continent of Ngayab and from that vantage point, be able to accomplish an immeasurable amount of
benefit to beings. Thus the Guru replied to Yeshe Tsogyal.

She responded by saying:

Oh great master, it is extremely kind of you to have spoken of these vast and immeasurable advantages of the spiritual energy of this mantra. For the benefit of sentient beings in the future however, a detailed explanation would be of enormous benefit, and so I would ask you to speak in a brief way about the different syllables of this mantra.

To which the great master replied:

O daughter of good family, the Vajra Guru mantra is not just my single essence mantra, it is the very essence or life force of all the deities of the four classes of tantra, of all the nine yanas, and all of the 84,000 collections of dharma teachings. The essence of all of the buddhas of the three times, all of the gurus, yidams, dakas, and dakinis, dharma protectors, etc., the essence of all of these is contained and is complete within this mantra. How, you may ask, does this work? What is the reason for all these being complete with this mantra? Listen well and hold this in mind. Read it again and again. Write it out for the benefit of sentient beings, and teach
it or demonstrate it to beings in the future.

OM is the perfect splendor and richness of sambhoghakaya
AH is the total unchanging perfection of dharmakaya, the manifest body of absolute reality
HUNG perfects the presence of Guru Padmasambhava as the nirmanakaya, the manifest body of emanation
VAJRA perfects all the heruka deities of the mandalas
GURU refers to the root and transmission gurus and the holders of intrinsic awareness
PEMA perfects the assembly of dakas and dakinis
SIDDHI is the life force of all the wealth deities and the guardians of the treasure teachings
HUNG is the life force of the dharmapalas, the protective deities

If a physical form could demonstrate the benefit of even one recitation of OM AH HUNG VAJRA GURU PEMA SIDDHI HUNG, the entire earth would not be sufficient to contain the merit. All sentient beings who see, hear, or remember this mantra will definitely be established in the ranks of the masculine and feminine awareness-holders. If it is the case that these words of truth of
the Vajra Guru mantra do not accomplish for sentient beings what they wish to accomplish just as I have promised, then I Pema Jungne, am truly deceiving sentient beings. But I have not deceived you, so you should practice according to my instructions.

Even if you are not able to recite the mantra for whatever reasons, you should mount it on the top of a victory banner, even when the wind touches it, and that wind touches sentient beings, it will free them without a doubt. Alternately, you may inscribe it in clay or carve it in stone. This will also guard the path upon which these syllables are placed and guard that region from malevolent effects. You may also write this mantra out in gold ink on dark blue paper and wear it as an amulet. When you die, if this amulet is burned with your corpse, rainbows will be seen and your consciousness will be transferred to the realms of Supreme Bliss. The benefits of writing out, reading or reciting this mantra defy any accurate measure and defy any standard measurement that could be applied. Having established this for the benefit of beings in the future, I am hiding this treasure. May it meet with a fortunate child of mine in the future who has good karma.