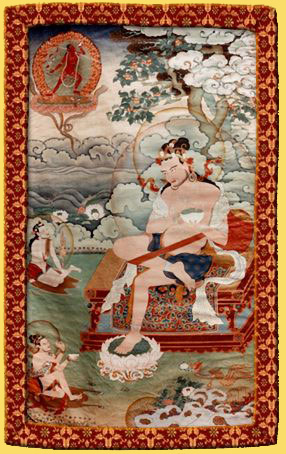 Mahamudra cannot be taught. But most intelligent Naropa,
Since you have undergone rigorous austerity,
With forbearance in suffering and with devotion to your Guru,
Blessed One, take this secret instruction to heart.

Is space anywhere supported? Upon what does it rest?
Like space, Mahamudra is dependant upon nothing;
Relax and settle in the continuum of unalloyed purity,
And, your bonds loosening, release is certain.

Gazing intently into the empty sky, vision ceases;
Likewise, when mind gazes into mind itself,
The train of discursive and conceptual thought ends
And supreme enlightenment is gained.

Like the morning mist that dissolves into thin air,
Going nowhere but ceasing to be,
Waves of conceptualization, all the mind’s creation, dissolve,
When you behold your mind’s true nature.

Pure space has neither colour nor shape
And it cannot be stained either black or white;
So also, mind’s essence is beyond both colour and shape
And it cannot be sullied by black or white deeds.The darkness of a thousand aeons is powerless
To dim the crystal clarity of the sun’s heart;
And likewise, aeons of samsara have no power
To veil the clear light of the mind’s essence.

Although space has been designated “empty”,
In reality it is inexpressible;
Although the nature of mind is called “clear light”,
Its every ascription is baseless verbal fiction.

The mind’s original nature is like space;
It pervades and embraces all things under the sun.
Be still and stay relaxed in genuine ease,
Be quiet and let sound reverberate as an echo,
Keep your mind silent and watch the ending of all worlds.

The body is essentially empty like the stem of a reed,
And the mind, like pure space, utterly transcends
the world of thought:
Relax into your intrinsic nature with neither abandon nor control –
Mind with no objective is Mahamudra –
And, with practice perfected, supreme enlightenment is gained.

The clear light of Mahamudra cannot be revealed
By the canonical scriptures or metaphysical treatises
Of the Mantravada, the Paramitas or the Tripitaka;
The clear light is veiled by concepts and ideals.

By harbouring rigid precepts the true samaya is impaired,
But with cessation of mental activity all fixed notions subside;
When the swell of the ocean is at one with its peaceful depths,
When mind never strays from indeterminate, non-conceptual truth,
The unbroken samaya is a lamp lit in spiritual darkness.

Free of intellectual conceits, disavowing dogmatic principles,
The truth of every school and scripture is revealed.
Absorbed in Mahamudra, you are free from the prison of samsara;
Poised in Mahamudra, guilt and negativity are consumed;
And as master of Mahamudra you are the light of the Doctrine.

The fool in his ignorance, disdaining Mahamudra,
Knows nothing but struggle in the flood of samsara.
Have compassion for those who suffer constant anxiety!
Sick of unrelenting pain and desiring release, adhere to a master,
For when his blessing touches your heart, the mind is liberated.

KYE HO! Listen with joy!
Investment in samsara is futile; it is the cause of every anxiety.
Since worldly involvement is pointless, seek the heart of reality!

In the transcending of mind’s dualities is Supreme vision;
In a still and silent mind is Supreme Meditation;
In spontaneity is Supreme Activity;
And when all hopes and fears have died, the Goal is reached.

Beyond all mental images the mind is naturally clear:
Follow no path to follow the path of the Buddhas;
Employ no technique to gain supreme enlightenment.

KYE MA! Listen with sympathy!
With insight into your sorry worldly predicament,
Realising that nothing can last, that all is as dreamlike illusion,
Meaningless illusion provoking frustration and boredom,
Turn around and abandon your mundane pursuits.

Cut away involvement with your homeland and friends
And meditate alone in a forest or mountain retreat;
Exist there in a state of non-meditation
And attaining no-attainment, you attain Mahamudra.

A tree spreads its branches and puts forth leaves,
But when its root is cut its foliage withers;
So too, when the root of the mind is severed,
The branches of the tree of samsara die

A single lamp dispels the darkness of a thousand aeons;
Likewise, a single flash of the mind’s clear light
Erases aeons of karmic conditioning and spiritual blindness.

Allow the muddy waters of mental activity to clear;
Refrain from both positive and negative projection –
leave appearances alone:
The phenomenal world, without addition or subtraction, is Mahamudra.

The unborn omnipresent base dissolves your impulsions and delusions:
Do not be conceited or calculating but rest in the unborn essence
And let all conceptions of yourself and the universe melt away.

The highest vision opens every gate;
The highest meditation plumbs the infinite depths;
The highest activity is ungoverned yet decisive;
And the highest goal is ordinary being devoid of hope and fear.

At first your karma is like a river falling through a gorge;
In mid-course it flows like a gently meandering River Ganga;
And finally, as a river becomes one with the ocean,
It ends in consummation like the meeting of mother and son.

If the mind is dull and you are unable to practice these instructions,
Retaining essential breath and expelling the sap of awareness,
Practising fixed gazes – methods of focussing the mind,
Discipline yourself until the state of total awareness abides.

When serving a karmamudra, the pure awareness
of bliss and emptiness will arise:
Composed in a blessed union of insight and means,
Slowly send down, retain and draw back up the bodhichitta,
And conducting it to the source, saturate the entire body.
But only if lust and attachment are absent will that awareness arise.

Then gaining long-life and eternal youth, waxing like the moon,
Radiant and clear, with the strength of a lion,
You will quickly gain mundane power and supreme enlightenment.

May this pith instruction in Mahamudra
Remain in the hearts of fortunate beings.

Mahamudra Instruction to Naropa in twenty Eight Verses was transmitted by the Great Guru and Mahasiddha Tilopa to the Kashmiri Pandit, Sage and Siddha, Naropa, near the banks of the River Ganga upon the completion of his Twelve Austerities. Naropa transmitted the teaching in Sanskrit in the form of twenty eight verses to the great Tibetan translator Mar pa Chos kyi blos gros, who made a free translation of it at his village of Pulahari on the Tibet – Bhutan border.
This text is contained in the collection of Mahamudra instruction called the Do ha mdzod brgyad ces bya ba Phyag rgya chen po’i man ngag gsal bar ston pa’i gzhung, which is printed at the Gyalwa Karmapa’s monastery at Rumtek, Sikkim. The Tibetan title is Phyag rgya chen po’i man ngag, or Phyag rgya chen po rdo rje’i tsig rkang nyi shu rtsa brgyad pa.

This translation into English has been done by Kunzang Tenzin in 1977, after transmission of the oral teaching by Khamtrul Rinpoche in Tashi Jong, Kangra Valley, India.