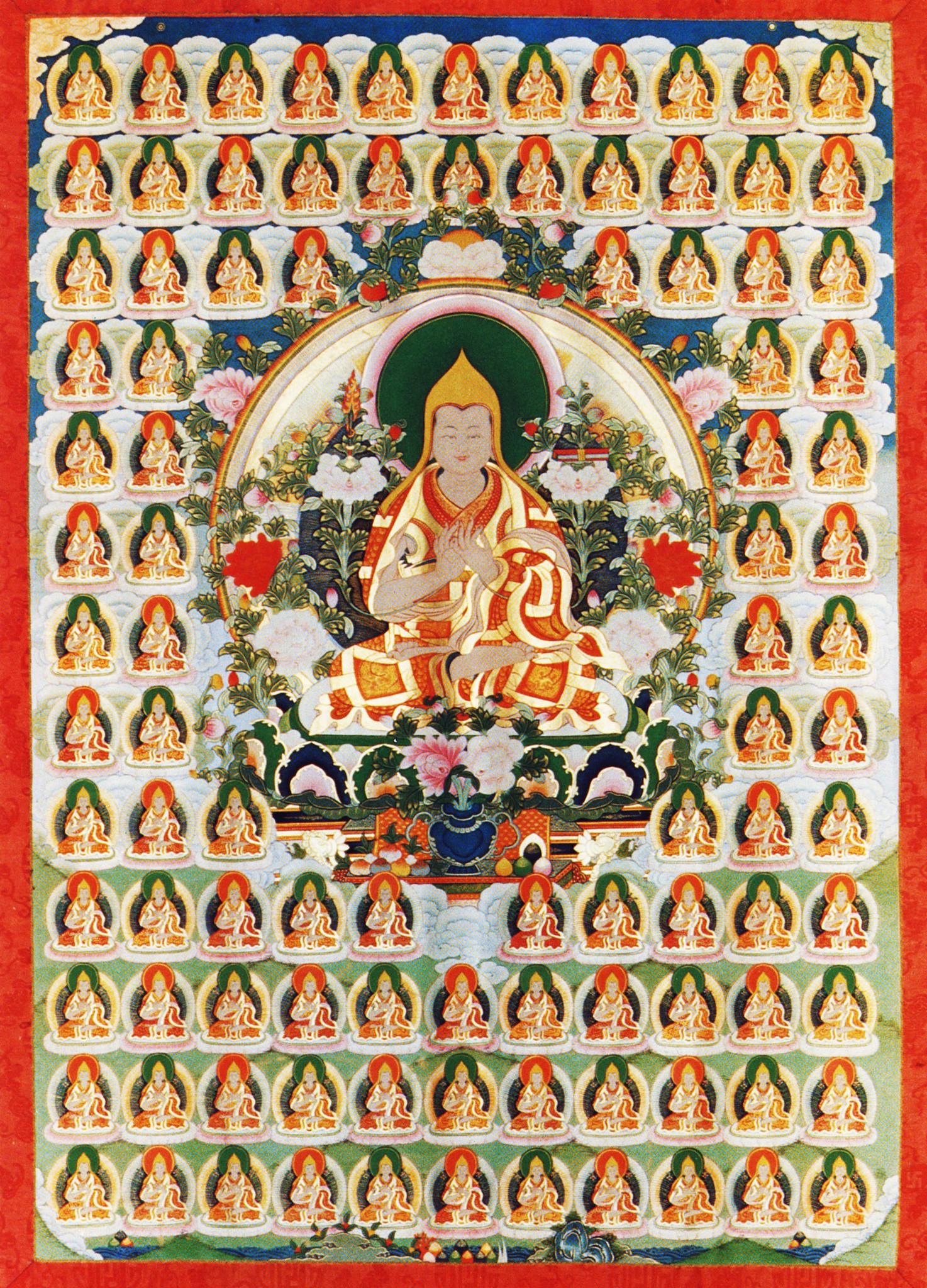 Expressing the Homage
I bow down to my perfect gurus.

The Promise to Compose
[1] The essential meaning of the Victorious Ones’ teachings,
The path praised by all the holy Victors and their Children,
The gateway of the fortunate ones desiring liberation –
This I shall try to explain as much as I can.

Persuading to Listen
[2] Those who are not attached to the pleasures of circling [samsara],
Who strive to make freedom and endowments meaningful,
Who entrust themselves to the path pleasing the Victorious Ones
You fortunate ones: listen with a calm mind.

The Purpose of Generating Renunciation
[3] Without the complete intention definitely to be free from circling,
There is no way to pacify attachment seeking pleasurable effects in the ocean of circling.
Also, by craving for cyclic existence, embodied beings are continuously bound.
Therefore, at the very beginning seek renunciation.

How to Generate Renunciation
[4] Freedom and endowments are difficult to find
And life has no time to spare.
By gaining familiarity with this,
Attraction to the appearances of this life is reversed.

By thinking over and over again
That actions and their effects are unbetraying,
And repeatedly contemplating the miseries of cyclic existence,
Attraction to the appearances of future lives is reversed.

The Definition of Having Generated Renunciation
[5] When, by having trained in that way,
There is no arising, even for a second,
Of attraction to the perfections of cyclic existence,
And all day and night the intention seeking liberation arises –
Then the thought of renunciation has been generated.

How to Generate the Mind of Enlightenment
[7] Swept away by the current of the four powerful rivers,
Tied by the tight bonds of karma, so hard to undo,
Caught in the iron net of self-grasping,
Completely enveloped by the total darkness of ignorance,

[8] Endlessly reborn in cyclic existence,
Ceaselessly tormented by the three sufferings –
Thinking that all mothers are in such a condition,
Generate the supreme mind of enlightenment.

The Definition of Having Generated the Mind of Enlightenment
[8a]1 In short,
If like the mother whose cherished son has fallen into a pit of fire
And who experiences even one second of his suffering as an unbearable eternity,
Your reflection on the suffering of all mother sentient beings
Has made it impossible for you to bear their suffering for even one second
And the wish seeking enlightenment for their sake arises without effort,
Then you have realized the supreme precious mind of enlightenment.

The Reason to Meditate on the Right View
[9] Without the wisdom realizing ultimate reality,
Even though you have generated renunciation and the mind of enlightenment
You cannot cut the root cause of circling.
Therefore, attempt the method to realize dependent arising.

Showing the Right View
[10] One who sees the cause and effect of all phenomena
Of both cyclic existence and the state beyond sorrow as forever unbetraying,
And for whom any object trusted in by the grasping mind has completely disappeared,
Has at that time entered the path pleasing the Buddhas.

The Definition of Not Having Completed the Analysis of the Right View
[11] If the appearance of dependent relation,
Which is unbetraying, is accepted separately from emptiness,
And as long as they are seen as separate,
Then one has still not realized the Buddha’s intent.

The Definition of Having Completed the Analysis of Right View
[12] If [these two realizations] are happening simultaneously without alternation,
And from merely seeing dependent relation as completely unbetraying
The definite ascertainment comes that completely destroys
The way in which all objects are apprehended [as truly existent],
At that time the analysis of the ultimate view is complete.

Having Gained Definite Ascertainment, Advice on Pursuing the Practice
[14] In this way you realize exactly
The vital points of the three principal aspects of the path.
Resort to seeking solitude, generate the power of effort,
And quickly accomplish your final goal, my child.

Lama Zopa Rinpoche’s Dedication:
From the merits collected by doing this work, transmitting Lama Tsongkhapa’s pure teaching — the heart of the 84,000 teachings of Buddha — into a western language, in a way as close as possible to the words and the meaning of the root text;

May this be most beneficial for all sentient beings, bringing kind mother sentient beings — whose lives are lost, under the control of karma and delusion, totally enveloped in the darkness of ignorance — to the achievement of enlightenment as quickly as possible.

May anyone who merely sees this text, reads this text, teaches this text, hears about this text, or keeps this text thereby actualize indestructible guru devotion, seeing the Guru as Buddha, and train well in the three common principles of the path, actualize the two stages, and achieve the unified state of Vajradhara as soon as possible. May he or she especially generate loving kindness, the compassionate thought, and bodhicitta and immediately become a source of peace and happiness for all sentient beings, especially in this world, and may all war, famine, disease, sickness, epidemics, torture, poverty, and the dangers of fire, water, wind, and earthquakes immediately cease so that no one will experience any of these undesirable circumstances ever again.

May the pure teachings of Lama Tsongkhapa flourish continuously and spread in all directions.

Notes
1. Stanza 8a is not part of Lama Tsongkhapa’s original text, but has been added here following Pabongkha Rinpoche’s outline.

Colophon by Lama Zopa Rinpoche:
These teachings by the virtue beggar [gelong] Losang Drakpa, who has extensive listening, were composed as advice for the nephew of Ponpo Ngawang Drakpa.

It was translated into English by the beggar of food and sleep named Lama Zopa, with the editorial assistance of the devoted Jonathan Landaw, in November, 2006 at Kachoe Dechen Ling, Aptos, California. This translation was undertaken with the intention of producing an English version that would include all the words contained in the original Tibetan, a number of which were omitted from some translations previously available. It is hoped that the present work will enable more people to receive benefit from Lama Tsongkhapa’s precious teachings.

A translation is available of Pabongka Rinpoche’s commentary on the Three Principal Aspects which is recommended by Lama Zopa Rinpoche.

One thought on “Lama Tsongkhapa: The Three Principal Aspects of the Path”