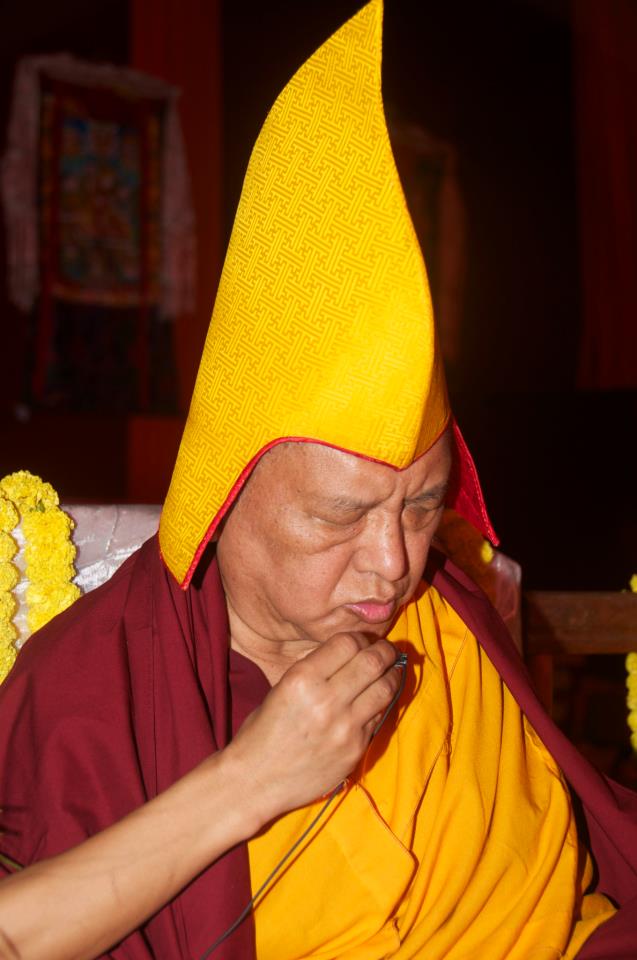 Lama Zopa Rinpoche: Since there is no change to the mind, the nature of life is always the same, constantly filled with problems.

I think there are some problems with the advice given by some areas of the psychology in Western culture. I quite often mention this. But I think nowadays as people’s minds are more open, maybe you use your own wisdom more rather than accepting the psychology, the guidelines written in [psychology] books. Nowadays maybe you should use your own wisdom more, rather than what is written in the books, the methods taught in the past or that have been used.

As I often mention, I’ve heard so many times that the basic psychological method that is advised for those people who are in an emotional state, such as anger, is to say whatever they want to say. The idea is this. Whatever hurting, bad words we want to say, we feel in the heart; whatever the mind wants to feel, we should express it to the other person, telling them whatever we think. Whatever comes out of anger, we just tell everything to the other person. Probably, that method is more based on us, we who have the problem, for our own interest, for our own happiness.
Expressing whatever the angry mind wants to say, whatever the selfish mind wants to express, the words that come out are only undesirable or hurting words, only hurting others. When we are able to say these things that we have kept inside us, we feel some kind of release. We feel release and rejoice that we have been able to hurt the other person by saying those harmful words to them. We feel that it’s good that we are able to do that, able to hurt them. This method is basically concentrated on being able to show the anger, being able to express the anger. There’s kind of rejoicing or feeling good, especially that we are able to hurt the other person using some powerful words. We label this as happiness and we simply focus on this.
With this method, when we see a person doing something we dislike in the family or in the office or wherever, inside or outside, when the person acts or has a way of speaking or behaving with the body that we dislike, then anger comes. Then we express that anger. We are advised like this to completely, immediately express our anger to that person. Then again in the afternoon, we see either the same person or another person doing something that we dislike, and again anger comes, and again we express that anger, completely, totally. Whatever we have to express with the mind, body and speech, whatever has manifested we express everything. Then again in the evening, somebody–either that same person or whoever–does something that we dislike, and again that anger comes. So again we express it, we let that anger arise, we let that anger explode, to that person or whoever. We say things. Then, it’s the same thing the next day, and this goes on and on. This goes on and on, this week, next week, this month, next month, this year, next year–the same, with no change to the mind. We’ve expressed our anger many times, numberless times, but there’s no development, no change to the attitude. There’s no end to the anger; there’s no end to hurting others.
And as we express our anger to the other person, that becomes the condition for the other person to get angry with us. So, besides ourselves, creating all those various harmful actions or negative karma out of anger [the other person does too].
It goes on like this from year to year. There’s no development, no change at all, with anger becoming less. [If we were to change our attitude,] even if it were still not possible to destroy anger, for there to be the cessation of anger, even if the mind were not developed to that degree, it would be much cleaner, much lighter. Even if anger were to arise, it would be much lighter and shorter, lasting a shorter time. This other way, however, there can’t be this development.

With the same mind it constantly interferes, because we’re not trying to change our own mind. Since we’re not trying to develop our mind, to make it pure, positive, we constantly have the same impure mind looking at things. The same mind constantly interprets because we’re not trying to change our own mind, not trying to develop our mind, to make the mind purer, more positive. Constantly the same impure mind looks at things impurely. The ordinary mind looks at everything as ordinary; the mistaken mind looks at things as mistaken. We look at others’ mistakes or we interpret things the wrong way, the negative way. The mind constantly judges the way others act in the wrong way, as harming us. We interpret the way others act to us as harmful. This ordinary mind, this impure mind, this negative thought looks at things as negative, judging or labeling and believing others’ actions as harmful to us.
Since there’s no mention of developing the mind, purifying the mind, transforming the mind into the positive attitude, what mind there is in life is constantly only the negative, impure, ordinary mind that looks at everything as negative, interpreting others’ actions as bad, as harmful to us. The mind projects these things.

Since there is no change to the mind, the nature of life is always the same, constantly filled with problems. Our life’s experience is constantly filled with problems. This is because our ordinary, impure, negative thoughts, the wrong conceptions, judge or project, labeling things as harmful or bad and believing it. From year to year it constantly goes on like this. Again there is anger, so it’s the same. In early life it’s like this; also in later life it’s the same–the same or maybe worse in the later part of life.
All this happens because the one practice, what is called patience, is not mentioned there. That advice is mentioned nowhere. That one positive attitude, that technique, patience, is never mentioned in the [psychology] guidelines. That’s the problem. That’s why there’s no progression, why we constantly experience the problems again and again. Instead of our anger becoming lighter, briefer in later life, it doesn’t change by the year or month. There’s no development of the mind in a month, a year, even in the whole life.