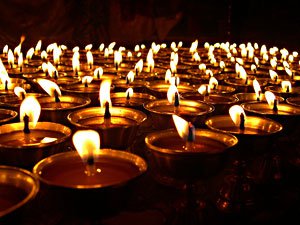 The Garland of Jewel Ornaments:

The Stages of Meditating on the Bodhicaryāvatāra

Homage to the gurus and supreme deities!

With your infinite emanations in realms beyond limit,
You turn the wheel of Dharma on a vast scale,
And bring disciples to full maturity—Lord of Sages,
And Mañjughoṣa, in devotion I pay homage to you!
With your delightful discourse, wondrous beyond measure,
And splendid to hear, you enthralled the learned—
Glorious Śāntideva, with all your many qualities,
In devotion, I pay homage to you!
Now, in order to benefit others, I shall explain,
By gathering and condensing the key instructions,
How to meditate on the Introduction
To the Way of the Bodhisattvas.

In the beginning, the foundation is laid through the generation of the two kinds of bodhicitta. Then the text explains the six pāramitās (or transcendent perfections), which constitute the training in the bodhicitta of application. Finally, any merit that has been gained is dedicated towards enlightenment, as presented in the tenth chapter.

All these different aspects of the teaching,
The Buddha taught for the sake of wisdom.
Therefore those who wish to pacify their ills
Should generate this wisdom in their minds.[1]

What then, you might wonder, is the method whereby wisdom is generated? Having first developed the wisdom of understanding the two truths, we must then focus on the aspect of relative appearances and meditate on their emptiness, which is the absolute truth of their actual nature. While meditating we need to take these appearances as the object of our focus, because without focusing upon a given basis for attributes or specific qualities, we will not be able to eliminate our misconceptions about those attributes. We must grasp well the meaning of this statement from the Ornament of Clear Realization:

The objects of focus, all phenomena…[2]

In the beginning, we must become familiar with the fact that things appear and yet lack any true nature, like magical illusions.

When we have developed proficiency in this, the aspect of appearances will vanish like a rainbow in the sky, and we can rest in meditative equipoise that is like the centre of space.

The way of asserting the apparent and non-apparent can also be understood from these two stages.

You should know that this, which is Lord Atiśa’s way of explanation, is just how it is in reality.

The meaning of all eighty-four thousand sections of the Dharma,
Is gathered together and included fully within this.
The key pith instructions of the learned ones
Are here explained, so meditate in the proper sequence.
Through whatever merit there is in this,
Brilliantly pure, like the light of the autumn moon,
May all beings be freed from the ocean of conditioned existence,
And arrive at the island of liberation and omniscience.

This Garland of Jewel Ornaments describing the stages of meditating on the Bodhicaryāvatāra was written by Rongtön Sheja Künrig at the great monastery of Pal Nālendra in the rabjung year [i.e., the beginning of the 8th sexagenary cycle, 1447].