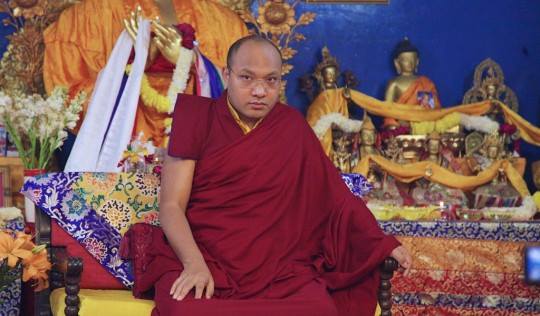 The Gyalwang Karmapa: We have an innate potential for compassion but, he cautioned, we need to train or it will not develop.

We Are All a Part of Each Other: The Gyalwang Karmapa Continues His Teaching on Bodhicitta.
January, 17, 2016 -Tergar Monastery, Bodh Gaya, Bihar, India
Continuing his explanation of how to meditate on relative bodhichitta, the Gyalwang Karmapa turned to the second one of considering individual beings to be like our mother. The reason we do this, he explained, is that all living beings have been abundantly kind to us. “We do not necessarily have to think of our parents here,” he added, “but simply remember how kind, loving, and affectionate living beings have been to us.” If we believe in past and future lives, he explained, we can consider that from beginingless time until now, we have taken innumerable births with different bodies and changing parents so that at one time or another, all living beings have taken a turn as our parents.

“If we do not believe in past lives,” he suggested, “there is still a way that we can meditate on all living beings resembling our mothers by reflecting on the situation in this world where we live. These times are known as the Information Era, and thanks to the Internet, we are becoming increasingly connected.” If we think about it a bit, he said, we can see clearly that our very lives depend on other people and other things. Usually the food we eat was grown by others, and the clothes we wear were stitched by others. We do not see or know them, yet still receive their kindness. “Therefore,” he concluded, “we depend on each other and support each other. This is our situation in the world. The kindness of one person allows another to live, so we are the kindness and we also depend on it from others.”

Usually, we think in terms of self and other as if there were a gap or separation between us. We also assume, the Karmapa noted, that our self is in control and autonomous and that the same is true for the other. But that is not the case, he said, for we depend on each other: our happiness and pain depend on others and their happiness and pain depend on us. It is important to recognize this. We are a part of others and others are a part of ourselves, he stated. Once we understand that this is the way things are, we naturally develop the feeling of wanting to do something about the sufferings of living beings and to help them find happiness.

Even if we know that this deep connection is the real situation, he stated, very few of us are ready to take responsibility for it. “People are fearful because they do not have great compassion,” he remarked, “but without this compassion, we will not have the confidence or even the idea to take responsibility for others.” It is important to make a distinction between sympathy (or empathy) and great compassion, he continued. “Usually when we think of sympathy or ordinary compassion, we think in terms of a subject in a good situation, who feels compassion, and the object of that compassion, who is someone more deprived.” With this mindset, he said, we are seeing them as different.” We need to change this, he said, so that we see the other’s suffering as a part of ourselves. This is hard to do physically but mentally, the one professing compassion can shift their attitude, he suggested, and open themselves to feeling the pain and suffering of others. They can also come to see that everyone has the same nature.

These days, scientists are talking about how all living beings naturally have compassion. The great philosophical texts of Buddhism also talk about this and how beings have different levels of compassion. We all have the seed of compassion, the Karmapa stated, but it is rather weak and underdeveloped as if we have shut the door on it. He gave the example of a child, who has the ability to speak, but if they happen to grow up in the wilds with no human companionship, they will not learn to talk. In the same way, the blossoming of compassion in someone depends on the surroundings. If the word compassion is heard often enough, then it will develop; otherwise our hearts will be hardened and insensitive.

We have an innate potential for compassion but, he cautioned, we need to train or it will not develop. With a great opportunity to expand our compassion, we must not let it go to waste but make every effort to enlarge it. With this counsel, the Karmapa ended the morning’s teaching. http://kagyuoffice.org/we-are-all-a-part-of-each-other-the-gyalwang-karmapa-continues-his-teaching-on-bodhicitta/