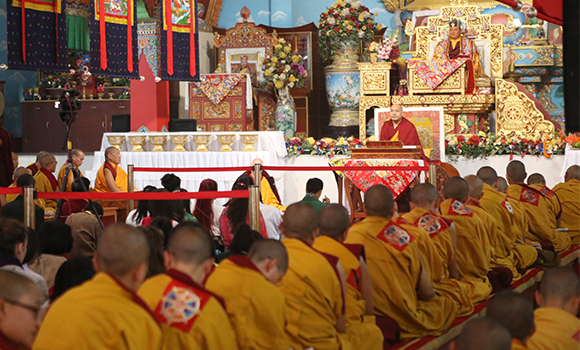 The Gyalwang Karmapa: “When we really think about our own situation we can see that this life of ours is interdependent, produced by other conditions”.

The Gyalwang Karmapa Teaches on Generating Equal Compassion for All Beings; Presents Vision for Monastic College for Kagyu Nuns

January 18, 2016 -Tergar Monastery, Bodhgaya, Bihar, India
During the fifth day of the Arya Kshema Winter Dharma Gathering, the Gyalwang Karmapa continued his teaching on generating bodhichitta based on Gampopa’s Ornament of Precious Liberation. He also discussed methods he would like to see enacted for promoting the continued flourishing of the Kagyu nuns study and contemplation of the great philosophical texts.

The Karmapa’s teaching today focused on how to generate equal compassion for all beings—our friends, our enemies, and those we feel neutral towards. First, the Karmapa said we need to examine the false idea that we are independent from other beings. The fact alone that our physical body comes from our parents is evidence we are not independent things. Furthermore, from the moment we are born, we are dependent on the kindness of our parents and others for our survival.

“When we really think about our own situation we can see that this life of ours is interdependent, produced by other conditions,” the Karmapa said. “Everything is dependent on something else. Looking at this, we see this is not some philosophical presentation but it is actually the value and basis of our human life.”

During the second half of the morning program the Karmapa reflected on success of the Arya Kshema Winter Dharma Gatherings so far, and discussed what he sees as important next steps for furthering the development of Kagyu nuns’ scholarly training.

In reflecting on this, the Karmapa noted that it has now been three years since this gathering began, providing an opportunity for Kagyu nuns to begin listening and contemplating the great philosophical texts. “The results of that are turning out nicely,” the Karmapa said.

To promote the continued flourishing of the nuns’ study and contemplation, the Karmapa said he would like to see a common Kagyu shedra (monastic college) created for Kagyu nuns. Currently, he said there are shedras in some nunneries, but this situation can make it difficult to find adequate teachers and financial resources for all of the separate programs. A common shedra would help to improve the quality of the education and make effective use of resources.

The Karmapa said this facility could also provide a place for nuns and lay women from all over the world to study Buddhism and do research at international standards. The Karmapa noted that nearby, there could also be a home for the community of bhikshunis who will be receiving the planned ordination. Specifically, the Karmapa said that to ensure the future of the lineage, it would be valuable for the bhikshuni sangha to gather together in a single space rather than live scattered in many different nunneries.

The Karmapa asked for representatives from each of the nunneries present at the Arya Kshema to meet in the new Tibetan year and come up with a plan for this overall nuns’ shedra. “It would be good to do this as quickly as possible,” he said.

The Karmapa also announced that as of the next Arya Kshema there will be a debate competition for the nuns, rather than simply debate training. “I believe you are ready,” he said, addressing the nuns. A debate competition is held each year for the monks, and the Karmapa said this has led to great improvement. He said a little competition can be good if it helps generate inspiration and enthusiasm for our studies. http://kagyuoffice.org/the-gyalwang-karmapa-teaches-on-generating-equal-compassion-for-all-beings-presents-vision-for-monastic-college-for-kagyu-nuns/