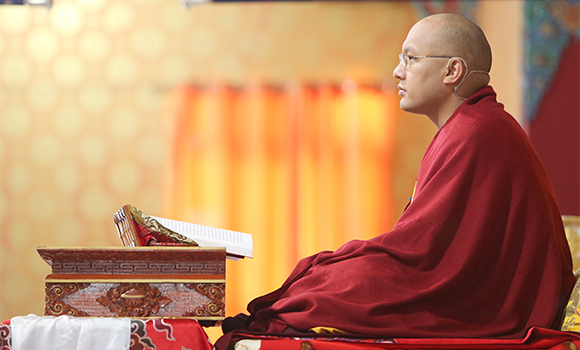 The Gyalwang Karmapa: Being a bodhisattva is working from now until Buddhahood.

The Gyalwang Karmapa Continues Teaching, Announces Plans for Shedra Curriculum
January 16, 2016 -Tergar Monastery, Bodhgaya, Bihar
Today’s teachings began with the sound of melodic chanting of the opening prayers; the nuns’ voices were led by a female chant master (umze). After the donations and offerings of white scarves by the lay sponsors, the Gyalwang Karmapa resumed the teachings on the 9th chapter of The Ornament of Liberation regarding relative bodhicitta. Picking up where he left off yesterday, he continued, “In terms of the methods for meditating on bodhicitta and the way to train and develop it, all of the texts on mind training are basically ways to meditate on bodhicitta, to train one’s mind in bodhicitta.” There is a text by the 8th Karmapa, Mikyo Dorje, called The One Hundred Short Instructions. In it, he explained, there are two methods for developing bodhicitta: one is considering samsara in general, and the other is considering individual sentient beings. To illustrate the first one, His Holiness referenced a verse by Nagarjuna saying that just as the earth, water, fire, wind, and just as the grasses and forests are the basis for sentient beings’ enjoyments, so too may I be the basis for all of their happiness and benefit.

Just as we have the earth, plants, forests, and all the natural world as the basis for our happiness, the Karmapa explained, so should we also be the basis of happiness for all others. “Our aspiration is that we, too, may be the basis and source of benefit and happiness for all sentient beings. We need to think about this aspiration and contemplate it for a long time until we have a strong longing and wish that we actually become it.” Further, if you look at this great earth, he continued, there are magnificent vistas and some landscapes that are completely pure. “Thinking, hearing, and remembering the earth brings benefit. We should also make the prayer that we, too, [can be of benefit]. It is important to develop the aspiration, ‘May I become like this.’” The earth is the basis of benefit for all sentient beings, not just for humans, not just for animals, but for all sentient beings.

The Karmapa differentiated between a limited bodhicitta and a vast, spacious bodhicitta for all beings. Through expanding our compassion beyond just our circle of family and friends, we develop an expansive attitude: our compassion is not just for our loved ones, friends and families, but for all sentient beings. The Karmapa asked us to take our compassion a step further—to develop it not just for those near to us, but even towards our enemies. “The other important point,” he continued, “is that when we have enemies or people who wish to harm us, sometimes dislike naturally arises; sometimes we don’t care what happens to them. But since we are Dharma practitioners, particularly of the Mahayana, when others cause us harm, we need to take a more spacious attitude.” His Holiness emphasized that it is important not to give up on those who dislike or wish to harm us. They, too, are often experiencing suffering. When someone has done something negative to us, the Karmapa advised, “It’s important for people training in the dharma to make a distinction between the individual and the act. For example, they may have been under the control of their afflictions, their environment, or their surrounding conditions. Realizing this, we can have a more spacious outlook.”

In closing, the Karmapa reminded us of what it means to be a Buddhist. “Being a Buddhist is not just about being kind in this lifetime. The bodhisattva’s vow lasts from lifetime to lifetime. We need to think about not just short term [happiness and suffering], but of lifetime after lifetime until there are no more sentient beings, until all beings are enlightened. Bodhicitta is not just about having a good heart for the short term. Being a bodhisattva is working from now until Buddhahood.” With that, His Holiness wrapped up the teachings of the day and then made an announcement regarding the study program for the nuns.

“In the past,” he said, “I have talked about how we should set up a curriculum for study in the shedras and the study institutes in the various Kagyu nunneries. We needed to discuss this and determine a good curriculum—what topics, their order, how many years to study them, and so forth.” He said, “I’ve thought about this, but have not really been satisfied. Then at the end of last year, I received an old book that had a text from the 9th Karmapa Wangchuk Dorje, in which he discussed the situation of various Kagyu monasteries during that time. Among the pages is a discussion of the curriculum they followed for their studies—the courses, their order, the topics they studied—and it is very clear. Now that I have received this, I think it’s possible for us to develop a good curriculum for our shedras.”

He continued, “From the time of the 7th to the 10th Karmapas, we knew that there were Kagyu shedras and that they were wide spread, but what we needed to know was what they studied and how. Knowing this, whether we are able to do it or not, we can at least use the lives and activities of the great masters of the past as examples for ourselves in making a new curriculum. This is my hope. Now that we can see their writings and know what they studied and how they did things, I’m inspired.” He noted that since there is historical backing for what he could do, he felt more comfortable in making these plans.

“In 1985 in Tibet,” the Karmapa explained, “people didn’t know there were any texts by Kagyu masters on the five great philosophical topics. Of course, they knew about the instructions on mahamudra and the Six Yogas of Naropa and so forth, but people did not know about these commentaries on the five great philosophical topics. So when Mikyo Dorje’s first appeared in Tibet, many people were surprised, and not just masters from other traditions, but even Kagyu masters did not know about these important commentaries.” As a consequence, many Kagyu masters would go to other traditions to study philosophy.

“Up to the time of the 10th Karmapa,” the Karmapa explained, “there were many shedras and scholars with a great tradition of study, but from that time onward, this tradition has declined since the Karma Kamtsang lineage of the explanation was more or less broken.” So when knotty points arose in a text, there was no commentary for reference. “But last year when I was visiting America,” he recounted,” I was given a text by the 6th Shamar Chokyi Wangchuk, which contains a general discussion of validity. It is an extremely clear text, which takes all the difficult points from the 7th Karmapa Chodrak Gyatso’s Ocean of Reasoning (treating Dharmakirti’s Commentary on Validity) and discusses them lucidly, presenting a general discussion as well as our own tradition.” The Karmapa commented, “Now that we have this text that is so explicit, we can see exactly what the answers to these difficult points are.”

This text by Chokyi Wangchuk also mentions another text with a general discussion of the Prajnaparamita, and the Karmapa hoped that it would appear in the future as well.

In closing he stated that with the rediscovery of this text on validity, it will be possible to determine the curriculum for our study. He concluded with hope that “during this Arya Kshema Winter Dharma Gathering, we will be able to determine the curriculum. Then if the nunneries implement it, I believe that in the future this will truly spread our tradition of explanations.” After this closing statement, the day’s merit was dedicated. Given what the Karmapa has said, it appears the Kagyu nuns of the Karma Kamtsang will play an instrumental role in reviving the study of the commentaries belonging to its lineage of explanation. http://kagyuoffice.org/we-are-all-a-part-of-each-other-the-gyalwang-karmapa-continues-his-teaching-on-bodhicitta/