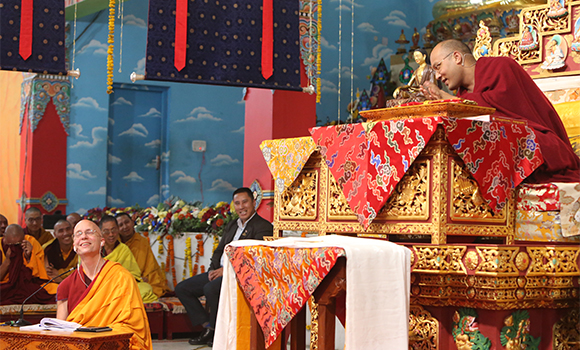 The Karmapa also explained why virtues are stronger than nonvirtues.

January 31, 2016-Tergar Monastery, Bodh Gaya, Bihar, India
During the 18th day of teaching at the Arya Kshema Winter Dharma Gathering, the Gyalwang Karmapa taught on the practice of purifying misdeeds, based on The Ornament of Precious Liberation by Gampopa. In particular, the Karmapa focused today on developing the confidence that it is possible to purify all our misdeeds through the practice of confession.

“Here it’s quite possible that we have a doubt,” the Karmapa said. “The reason is that up until now we have done innumerable misdeeds, so how is it that just one little confession in this life can actually purify all of our misdeeds? If we do not have complete confidence in the antidote of confession, then it has less power to purify our misdeeds.”

In response to this, the Karmapa mentioned a commentary explaining that the Buddha taught about both misdeeds and the possibility of purifying them. So it doesn’t make sense to believe one of these but not the other. “If we believe the words of the Buddha that a misdeed is a fault,” the Karmapa said, “then we also should believe the Buddha that if we apply the antidote we can purify that fault.”

The Karmapa also explained why virtues are stronger than nonvirtues. “Even a minor virtuous action is able to destroy a mountain of misdeeds as large as Mount Meru,” said the Karmapa. “I think the reason for this is that unlike virtues, unvirtuous thoughts, such as those of greed, anger and delusion, are actually erroneous and not in harmony with the way things actually are. They don’t fit with the nature of things, or you could say they are not supported by how things actually are. Virtuous intentions, on the other hand, have the support of the truth—an actual basis, a true support—and for that reason virtue becomes more powerful. These are some of the many reasons why even a minor virtue can destroy a heap of misdeeds.”

Having explained that it is possible to confess our misdeeds, the Karmapa also warned against becoming careless in our actions. He likened misdeeds to tuberculosis—just because there is medicine for it doesn’t mean we should disregard it.

Earlier in the teaching, the Karmapa also briefly discussed the upcoming commemoration for the Sixteenth Gyalwang Karmapa, which will take place on February 14. The Karmapa explained how one of the 16th Karmapa’s greatest activities was reprinting the Dege edition of the Kangyur and distributing it to all the monasteries of the different traditions. In honor of this activity of the 16th Karmapa, the commemoration this year will feature the unveiling of a reprinted edition of the Jang Kangyur, both in paper and online form. The Karmapa explained how the Jang Kangyur was the first edition of the Kangyur to be printed in a Tibetan region, and that most of the original woodblocks are now gone. “This is an important and precious edition,” he said, “and our hope is that in reprinting it the will help to revive teachings in danger of being lost.”