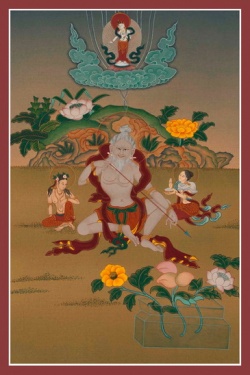 1 As calm water lashed by wind
Turns into waves and rollers,
So the king thinks of Saraha
In many ways, although one man.

2 To a fool who squints
One lamp is as two;
Where seen and seer are not two, ah! the mind
Works on the thingness of them both.

3 Though the house-lamps have been lit,
The blind live on in the dark.
Though spontaneity is all-encompassing and close,
To the deluded it remains always far away.

5 As a cloud that rises from the sea
Absorbing rain the earth embraces,
So, like the sky, the sea remains
Without increasing or decreasing.

6 So from spontaneity that’s unique,
Replete with the Buddha’s perfections,
Are all sentient beings born and in it come
To rest. But it is neither concrete nor abstract.

7 They walk other paths and so forsake true bliss,
Seeking the delights that stimulants produce.
The honey in their mouths and to them so near
Will vanish if at once they do not drink it.

8 Beasts do not understand the world
To be a sorry place. Not so the wise
Who the heavenly nectar drink
While beasts hunger for the sensual.

9 To a fly that likes the smell of putrid
Meat the fragrance of sandalwood is foul.
Beings who discard Nirvana
Covet coarse Samsara’s realm.

10 An ox’s footprints filled with water
Will soon dry up; so with a mind that’s firm
But full of qualities that are not perfect;
These imperfections will in time dry up.

11 Like salt sea water that turns
Sweet when drunk up by the clouds,
So a firm mind that works for others turns
The poison of sense-objects into nectar.

12 If ineffable, never is one unsatisfied,
If unimaginable, it must be bliss itself.
Though from a cloud one fears the thunderclap,
The crops ripen when from it pours the rain.

13 It is in the beginning, in the middle, and
The end; yet end and beginning are nowhere else.
All those with minds deluded by interpretative thoughts are in
Two minds and so discuss nothingness and compassion as two things.

14 Bees know that in flowers
Honey can be found.
That Samsara and Nirvana are not two
How will the deluded ever understand?

15 When the deluded in a mirror look
They see a face, not a reflection.
So the mind that has truth denied
Relies on that which is not true.

16 Though the fragrance of a flower cannot be touched,
‘Tis all pervasive and at once perceptible.
So by unpatterned being-in-itself
Recognize the round of mystic circles.

17 When in winter still water by the wind is stirred,
It takes as ice the shape and texture of a rock.
When the deluded are disturbed by interpretative thoughts,
That which is as yet unpatterned turns very hard and solid.

18 Mind immaculate in its very being can never be
Polluted by Samsara’s or Nirvana’s impurities.
A precious jewel deep in mud
Will not shine, though it has luster.

19 Knowledge shines not in the dark, but when the darkness
Is illumined, suffering disappears at once.
Shoots grow from the seed
And leaves from the shoots.

20 He who thinks of the mind in terms of one
Or many casts away the light and enters the world.
Into a raging fire he walks with open eyes–
Who could be more deserving of compassion?

21 For the delights of kissing the deluded crave
Declaring it to be the ultimately real–
Like a man who leaves his house and standing at the door
Asks a woman for reports of sensual delights.

22 The stirring of biotic forces in the house of nothingness
Has given artificial rise to pleasures in so many ways.
Such yogis from affliction faint for they have fallen
From celestial space, inveigled into vice.

23 As a Brahman, who with rice and butter
Makes a burnt offering in blazing fire
Creating a vessel for nectar from celestial space,
Takes this through wishful thinking as the ultimate.

24 Some people who have kindled the inner heat and raised it to the fontanelle
Stroke the uvula with the tongue in a sort of coition and confuse
That which fetters with what gives release,
In pride will call themselves yogis.

25 As higher awareness they teach what they experience
Within. What fetters them they will call liberation.
A glass trinket colored green to them is a priceless emerald;
Deluded, they know not a gem from what they think it should be.

26 They take copper to be gold. Bound by discursive thought
They think these thoughts to be ultimate reality.
They long for the pleasures experienced in dreams. They call
The perishable body-mind eternal bliss supreme.

27 By the symbol EVAM they think self-clearness is achieved,
By the different situations that demand four seals
They call what they have fancied spontaneity,
But this is looking at reflections in a mirror.

28 As under delusion’s power a herd of deer will rush
For the water in a mirage which is not recognized,
So also the deluded quench not their thirst, are bound by chains
And find pleasure in them, saying that all is ultimately real.

29 Nonmemory is convention’s truth
And mind which has become no-mind is ultimate truth.
This is fulfillment, this the highest good.
Friends, of this highest good become aware.

30 In nonmemory is mind absorbed; just this
Is emotionality perfect and pure.
It is unpolluted by the good or bad of worldliness
Like a lotus unaffected by the mud from which it grows.

31 Yet with certainty must all things be viewed as if they were a magic spell.
If without distinction you can accept or reject Samsara
Or Nirvana, steadfast is your mind, free from the shroud of darkness.
In you will be self-being, beyond thought and self-originated.

32 This world of appearance has from its radiant beginning
Never come to be; unpatterned it has discarded patterning.
As such it is continuous and unique meditation;
It is nonmentation, stainless contemplation, and nonmind.

33 Mind, intellect, and the formed contents of that mind are It,
So too are the world and all that seems from It to differ,
All things that can be sensed and the perceiver,
Also dullness, aversion, desire, and enlightenment.

34 Like a lamp that shines in the darkness of spiritual
Unknowing, It removes obscurations of a mind
As far as the fragmentations of intellect obtain.
Who can imagine the self-being of desirelessness?

35 There’s nothing to be negated, nothing to be
Affirmed or grasped; for It can never be conceived.
By the fragmentations of the intellect are the deluded
Fettered; undivided and pure remains spontaneity.

36 If you question ultimacy with the postulates of the many and the one,
Oneness is not given, for by transcending knowledge are sentient beings freed.
The radiant is potency latent in the intellect, and this
Is shown to be meditation; unswerving mind is our true essence.

38 The buds of joy and pleasure
And the leaves of glory grow.
If nothing flows out anywhere
The bliss unspeakable will fruit.

39 What has been done and where and what in itself it will become
Is nothing; yet thereby it has been useful for this and that.
Whether passionate or not
The pattern is nothingness.

40 If I am like a pig that covets worldly mire
You must tell me what fault lies in a stainless mind.
By what does not affect one
How can one now be fettered?