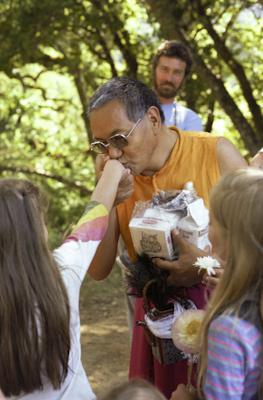 This week many of us head into a long holiday weekend with family and friends. We’d like to share an excerpt from Lama Yeshe’s Christmas teachings originally published by Wisdom Publications in 1978 under the title Silent Mind, Holy Mind.

This is the week of Holy Jesus’ birth, and I suggest that in honor of this special event we make some sort of celebration. But we should try to make it meaningful. It should not be some sort of physical sensation, bringing only more confusion and superstition to our minds.

For a Christmas celebration to be a good one, it must be of a truly religious nature. Jesus came to this Earth and presented his teachings, but worldly beings completely disregard this fact. For them, Christmas means – first and foremost – spending money, buying presents, and creating confusion. Such confusion is entirely of our own making. We have the power to make Christmas meaningful, peaceful, and truly religious, but instead of using this power we succumb to worldly negative energy. We go shopping to buy presents, but this is not done with anything even resembling a loving attitude. We think, “I really must buy something for my sister, because if I don’t give her anything, maybe she won’t like me anymore. Maybe she won’t give me anything either.” Or, “I better not get my friend a cheap present, or I might not get anything valuable back from him next year.” Such thoughts are extremely negative, leading to nothing but dissatisfaction. They are totally involved with egotistic and immature notions about what true happiness is. They have nothing whatsoever to do with religion.

True religion brings peace and satisfaction to the mind. Actions that arouse only confusion serve no religious function at all. They stem instead from a political mind that thinks, “If I give this, I’ll get that in return.” Such a mind is extremely immature. It delights when many presents are received, and is depressed when expectations go unfulfilled. What difference, then, is there between such a mind and that of a small child? We consider ourselves to be grown up, but our actions and attitudes show us to be little different from our children. They exaggerate the importance of receiving gifts, and so do we. In fact, their exaggerated expectation of their minds of confusion and dissatisfaction are mainly developed by watching us. If we were to act in a consistently mature and meaningful way, our children would also become peaceful. We sometimes think that they are naturally berserk, and that we are something special but this is not so. Check up and see exactly what happens when a holiday approaches. We are the ones who create the commotion. The first thing that happens at the beginning of a holiday is that husband and wife, brother and sister and so forth begin to fight with one another. Be honest, and investigate the truth of this. I am not trying to be excessively negative; just check up and see if this is true or not. Holiday bickering has so much jealousy in it, “Let me see, what did you get? What did you get?” Such a dualistic mind is totally submerged in selfishness and wrong conceptions.

This deluded behavior is not common only to one type of culture. It can be found everywhere. Similarly, the antidote to this confusion is not taught merely in Buddhism. All religions strive to counter unsatisfactory, confused attitudes and bring us peace of mind.

It is characteristic of materialistic people that they believe their happiness and frustration to be totally dependent on external phenomena and possessions. If they do not receive enough ice cream and cake they are despondent: “I feel so empty. This Christmas has been such a flop I could die!” For them, the success or failure of a religious holiday depends entirely on material things. They cannot discover peace and happiness within their own consciousness, depending instead on some external, physical sign of “love.” It does not matter how much they might profess to be spiritual; their minds are completely obsessed by the gross, material level of reality….

When Jesus was living on earth, there were no churches and such. His religion was not divided up into many groups and societies with people saying, “I’m a member of this sect; what denomination are you?” Things had not yet tightened up to the point where the religious follower felt compelled to choose one path or another. In this respect, at least, the people were much more liberated than we are today. Whatever they did in terms of their religion was done honestly and sincerely. Nowadays when you ask someone why he follows a particular religious tradition, he is likely to say, “Because my father did,” or “Because that church is near my house.” It is ridiculous to follow a particular set of teachings for these reasons. Others belong to a certain religion because it has the largest congregation in town. This also has nothing whatsoever to do with the true spirit journey.

One solitary being sincerely actualizing the everlasting peaceful path to liberation is more precious than a whole host of confused beings shouting. “This is my religion!” Such people may easily criticize the sincere seeker, despising him for holding beliefs contrary to those of the multitudes. Sheer numbers count for nothing in spiritual terms. It does not matter how many people are engaged in building a church, temple, or monastery; if they lack true religious feeling, their actions mean nothing….

Therefore, if our Christmas celebration is to be truly religious, it is important to remember who Jesus was, what he did and what he stood for. In this way we can understand how he benefited so many sentient beings and why he has been such a positive force, not merely in his own time, but throughout the last 2,000 years, and up to the present day.

Jesus had exceptionally great compassion. It is very good to check up on this fact, and consider it deeply.

If the thought comes to our mind, “I must gain his realizations and become as compassionate as he was,” then this is the most perfect basis on which to have a celebration of his birth. With this feeling in our hearts, a Christmas festival can be very meaningful and worthwhile.